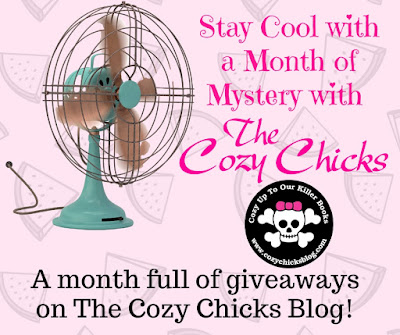 Duffy Brown here to kick off a month of prizes from the Cozy Chicks. It’s July and a summer like we’ve never seen before but summer it is so let’s get on with it.
Most things are different but not everything. In fact food has taken on a whole new importance and now that we are home more it’s time to try something new. 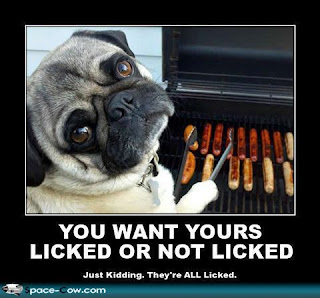 I love grilling! I swear you could grill a stick and I’d probably eat it...and its vegan so that would really work. But there are better things to grill even if I am vegan. 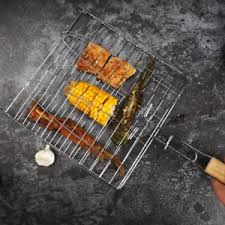 I just bought this veggie grill hamper thing where you put in the veggies and add a Beyond Meat Burger and bingo... I have grilled yumminess. And it’s trapped between the grate so nothing spills out. I’ve lost more than my share of burgers/hot dogs/ corn to the charcoal gods.
And then there’s another fave...veggie kabobs: 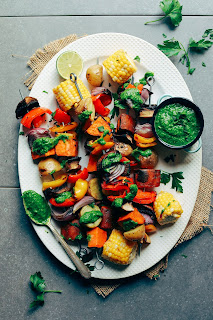 Skewer Chunks of: sweet potato, Cob corn, red/yellow peppers, red onion, mushrooms, zucchini, etc. S&P and grill. I like mine a little blackened.
Serve with Auntie KiKi’s magic sauce of smashed avocado, cilantro, S&P, lime juice and a dash of maple syrup. It’s soooo good and fresh
Have you tried something new on the grill this summer? Got a fave? A new recipe?
Let me know how your hunkered-down summer is going and I’ll choose a pillow winner. Winners will be listed on the left side of the blog. 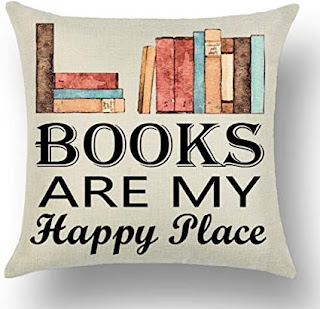 Have a good summer!!! If you feel down, write me and we can whine (or wine) together.
Hugs and Hugs, Duffy

My hubby is the grill master here and I never know quite what he is going to slap on the grill--- could be kabobs, could be cantaloupe. Whatever it is, it's always tasty. Happy hunkered down summer :)

Not really hunkered down. As an essential business (Agriculture) we are functioning within all the guidelines. It is now cherry picking season, so dinner can be anywhere from 5 pm until 8 pm. Some nights we grill a lot and then have leftovers the next. Cheers (at) MarjimManor (dot) com

We haven’t grilled anything yet this year. It went from chilly and rainy to hot and humid.
sgiden at verizon(.)net

We don't have a grill but my favorite thing is S'mores. Our hunkering is going pretty good. Things aren't as bad in our state so we venture out to the grocery store every couple of weeks. Not too exciting but better than the poor sick people. ckmbeg (at) gmail (dot) com

So excited for all your giveaways this month! As for grilling, we haven't done a lot of it yet this year...just the same ole, same ole: chicken skewers, veggies, hot dogs. But last year I discovered grilled eggplant, and absolutely LOVE it! My hubby isn't fond of eggplant, so making it for myself when we grill was a real treat! Will definitely be doing more of that this summer!

When I was living in Indiana before my husband passed away over three years ago we were always having people over to grill and socialize. One of the many things I love and miss about him is his kindness and generosity, he loved to cook and he was a terrific carpenter. I now live in an apartment in Chicago so no grilling here for me unless it's on top of my stove. Thanks for your amazing generosity. Have a terrific 4th of July and stay well and safe.

We’ve already been grilling here in NJ since it’s felt like summer for at least a month! No special summer plans because of COVID. We usually travel to Canada to visit family but the border is still closed so it looks like that won’t happen this year.

Mmmmm.....grilled corn on the cob in the husk is so delicious! Then add the melted butter and a little Parmesan cheese!

I love grilled steak. Sorry I know you are vegan, but I need my red meat. We enjoy grilling. Thank you for the chance to win the wonderful pillow. Funny thing is my life hasnt changed much since the virus. Although I have fallen in love with grocery delivery, lol

I love griilling too
Veggies are yo die for

Hello Duffy! Here in Tennessee it is hot and humid, but the grills are going strong. My favorite grilled foods are pretty basic. I love a great steak or a hamburger with all the trimmings. I also enjoy corn on the cob coated in butter, wrapped in foil, and grilled to perfection. Yum!

Don't want to insult your vegan ways but it's mostly meat on the grill at our house. Nothing smells better than beed or chicken spiced just right on an open flame!

Howdy! We absolutely LOVE grilling out! For us (as Vegans) it's tons of veggies... but we use cast iron on it too. My hubby just made Frijoles Charros (minus the bacon) in the dutch oven- he cooked them for 5 hours & they were AWESOME!
Cheers-
Kelly Braun

We are definitely hunkering down. I have cooked more since all this started and we are using our smoker quite often.

My daughter is making us kabobs this weekend! Your veggie one and sauce sound great!! Otherwise my hubby grills a lot--we've even made quesadillas on the grill. Also baked chickens too.

we haven't done a lot of grilling yet, though oldest son grills often for himself since his meals are often prepared earlier in the day or later at night depending on his work schedule.

I don't have a grill, but I love roasted Brussels Sprouts, and, as I like them really blackened, I keep thinking that they would be amazing grilled!

My husband is the grill master. He’s looking to downsize his worn out grill as there is only the two of us here. A son-in-law had a big grill installed in their backyard snd does the big family grilling now.

In between some rainstorms it's been pretty hot and humid lately, so we've only grilled a few times: burgers, brats, steak and hotdogs. I do the prep and any sides/salads while hubby mans the grill. This weekend I'm planning on grilled shrimp and veggie kabobs. We love grilled corn, and also fruits like pineapple & peaches, yum!

I haven't grilled this year, but one of my favorite dishes is to take potatoes, onions, and green peppers, put them in foil and put them on the grill. Yum.

My husband does the grilling and we use our grill a lot. I'm going to try corn on the cob on the grill this year

Hubby has been smoking more than grilling, but he did grill steaks, shrimp, and asparagus recently...so good. Thank you for the chance to win.

How am I hunkered down? Well luckily this Summer so far we are in the "green" with restrictions.
So far this Summer we've grilled Hamburgers and Hotdogs and even sauted onions and mushrooms and making plans to possibly grill for the July 4th weekend. We've done steak on the grill.
The man of the house does the grilling but it's always delicious. I do the getting it ready work and the man of the house grills. Would love to try Corn On The Cob on the grill sometime.
We love to grill at our house. We're not vegans but love our meat. We do saute mushrooms and onions on the grill.
I visited my brother in law and he makes a mean hamburger with peppers in it and it's seasoned.
I love that pillow so cute. Hope I win.
Crystal

We grill at least once a week. Definitely enjoy it. Doing lots of reading while hunkered down.

Hi Duffy, I didn't have a grill, but I love a grilled rib eye steak with some veggies. Still sticking pretty close to home, spending time with the cats and doing lots of reading.

I cooked a yummy smoked pork shoulder on the grill and made some amazing street tacos with it. I made regular coleslaw and a mango salsa to top them with and a wedge of lime with each taco. Delicious!

I've been doing lots of reading and diamond art projects. We try and grill at least once a week.

The summer is going good. I've been staying inside & reading a lot.

I have started grill foil packs. Makes things so much easier to do. Summer squash,zucchini ,some onion , sweet potatoes, garlic and butter. So good.

I have started grill foil packs. Makes things so much easier to do. Summer squash,zucchini ,some onion , sweet potatoes, garlic and butter. So good.

I don't grill but I have a friend that does and we'll get together for burgers, hot dogs, and Smores at least once a summer.
Haven't had to hunker down yet. It's so small and rural here we haven't been hit by all this, and I still have to go to work anyway (nursing home), so most of my day is spent there.
kozo8989(at)hotmail(dot)com

The great thing about summer is being outside at the BBQ so you don't have to heat up the kitchen. It's CANADA DAY here so it is the perfect day to celebrate outdoors!

We live in an apartment complex where most of the amenities (clubhouse, gym, pool, parties, etc.) have been cancelled. We do have grounds to walk pets, and a pleasant gazebo to sit in when weather permits, and an outdoor grill, but I prefer to do my grilling indoors. Since the isolation, I've gotten my husband to read a lot more and have downloaded ebooks from library for him. He is now my reading partner!!

Good evening, my summer has been spent, literally hunkering down. Hiding from the beautiful weather due to a year long massive headache, surgery and this weekend, we'll be hanging out with friends at a campground.

My husband does all the grilling. We tend to be traditional and grill lots of hot dogs and hamburgers, but this weekend we've got some great steaks to grill for the 4th.

My husband bbq all year round so love grilling. (less dishes to do). We are spending time doing bathroom renovations and lots of work in the yard. Thanks for the great giveaway.

I have been waiting to see if I still have a job....driving me crazy. I have been pInting my kitchen cabinets and hope to finish by next week.

I love marinated party pan squash cooked on the grill!

We don't have a grill, but hopefully plan to get one soon. We are hanging in there for the most part. Hubby has been working this entire time, but his hours were drastically cut and also his pay. (He's been at the company for 22 years and unfortunately they are struggling and we hope when more businesses start to open that things will pick up) But through all this craziness we have been able to eat at home every day, no running around crazy to dance and band and soccer every week, eating on the go.. and now discovering that I have gained a bunch of weight the last 4 months, it is obvious to me that I am a stress eater, and needless to say it's been stressful. - The weather the next week is supposed to be well into the 90's, so I'm looking forward to getting water balloons ready and have fun with the kids outside. I am sorry, I think I gave you way more information than you wanted. Thank you for the chance.

Spooky jumped on the computer keyboard and Lily-Ann Gill is the winner of the pillow. Lily-Ann if you would send me your address to DuffyBrown@DuffyBrown.com I will send along the pillow.
Thanks everyone for playing along. See you next Wednesday

Thank you sooooo much!! I justsjust you a message🤗🤗