Never were they more appreciated 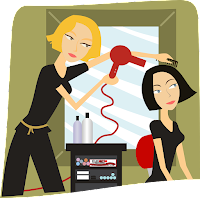 Today is National Beautician Day. Like a lot of you, I haven't had my hair done in months.  Because of Covid-19, hair salons and barber shops were closed in my state for three months.

We played snowbirds this past winter and stayed at an Airbnb in Greenville, SC. I got a cut and color a week before we left. Because I had to find a place to get my haircut during our southern stay, I stretched it out to six weeks (I usually go at 4 weeks.)

I chose a franchise place and had sticker shock. It was nearly three times what I paid my (indie) hairdresser at home. Being a cheapskate (and as someone who isn't thrilled about navigating a strange city), I decided not to get my hair cut in March. (Bad decision on my part.) Instead, I headed to the store and bought a box of hair dye. It had been years since I dyed my hair myself, but it was doable and though I was a little shaggy, I figured I could live with it. After all, I would be home in a month and could get my hair cut by my regular hairdresser.

And then Covid-19 hit hard. We cut short our southern stay by two weeks when New York shut down. It was an eerie trip back north, with the roads jammed with RVs hurrying back to Canada and lots of big trucks and virtually no passenger vehicles--long lines at fast food joints and nowhere to stop for bathroom breaks. But we made it home and except for curbside pickup, we've pretty much stayed home. 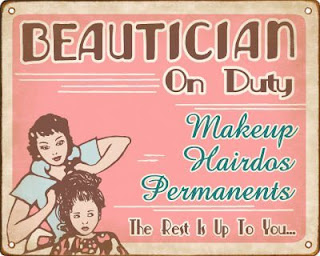 My hair looks like H-E-double hockey sticks. It's now long enough that I've taken to wearing it in a ponytail. If I go out of the house (twice this month) I wear a hat. Of course, no one can tell who I am when I'm wearing a mask, but that's beside the point.

Although they've reopened salons in my state, my indie hairdresser hasn't reopened. She has a setup in her home and has an elderly mother. There's no way she's going to expose her mother to Covid-19. And although the risk isn't as great where I live, I'm not willing to expose myself to it by going to a strange hair salon, either.

Mr. L is another matter. He let me cut his hair, and while it's still rather shaggy, it looks a lot better than mine. Of course, Mr. L sees me through the eyes of love, so he's oblivious to my many bad hair days. (At least he hasn't mentioned it.)

Thanks to online shopping, I now have three boxes of hair dye and it's long past time to attack my roots. By tomorrow, I'll be young again!

Have you avoided the hairdresser and any other services since this whole pandemic arrived?
Posted by Lorraine Bartlett at 5:42 AM

I'm in Western NY so I was so happy my hairdresser finally reopened! I saw her last Friday for the first time in 13 weeks. My grays were so bad so was joking that she was going to use me as a before & an after photo to drum up business (she's also my cousin so the teasing was expected). I'm still avoiding dining out. Can't give a good explanation other than I don't feel comfortable with it as yet.

I am coloring my own hair and had my daughter cut some bangs for me. I have decided since I am not going anywhere, a ponytail will work just fine. Our salons opened about a month ago but they are not required to wear masks and neither are the customers. So I will not be visiting for a very long time.

I'm with you, Ryannaward. I just don't feel comfortable going out. I see the news about states where they aren't being careful about wearing masks and social distancing and I'm grateful I live in a space where this virus is being taken seriously.

I saw a great meme on FB the other day, which more or less says: If you could take a pill that made you 5 times less likely to catch the virus would you take it? That's what a mask can do for you.

I love the Cozy Chicks blog and all the authors.