THE SUMMER I ADOPTED A GARRISON IN IRAQ 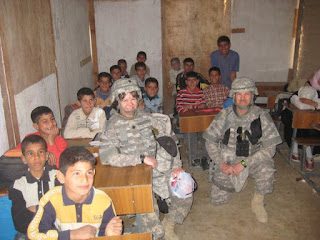 A few summers ago, I adopted the "389th Renegades," an amazing division in Iraq. I like to post my article from Publisher's Weekly every Memorial Day to celebrate these amazing soldiers and their sacrifice. Pictured is Lt. Col. Lisa Schieferstein and Corporal Eric Cooke vising an Iraqi school, bringing books and toys.

I'd never met Lt. Col. Lisa Schieferstein, yet I was intrigued by her story.
I knew Lisa was half a world away, doing a tough job in a gritty, remote location. As the garrison commander of the 389th "Renegades" division in Iraq, she was stationed at a desert outpost, with 90 soldiers under her command. The heat was appalling, the conditions were rugged, and danger was ever present.

Want to reprint? Get permissions.

Even though my life is incredibly cushy by comparison (a nice psychology practice in Delaware, a second career as a mystery novelist), when I saw a photo of Lisa—in full body armor—visiting a one-room Iraqi schoolhouse to bring books to the children, I knew right away we had something in common: a love of books.
We began to e-mail each other, and I got a glimpse of her day-to-day life. When I learned that the 389th was a sustainment division, offering food and snacks to American convoys passing through, I decided to send boxes of books and homemade goodies every two weeks.
Then Carolyn Hart, author of 44 mysteries, heard about the project and made an interesting offer: "Let me send 20 pounds of coffee, snacks, and books to celebrate the publication of Laughed 'Til He Died. It's the 20th release in my Death on Demand series, and this would be a nice way to commemorate the event."
Nice? It was fabulous! Carolyn was as good as her word, immediately sending more than 20 pounds of treats and books to the troops.

But it didn't stop there. We received such a positive response from the Renegades that we kept going. We had to—the soldiers said they loved these boxes from home.
Carolyn told me that when she packed up the boxes for the soldiers, she "pictured young Americans—and some not so young—far from home, beset by horrendous heat and dirt, lonely, tired, and always in danger. The boxes held so little, but they were sent with love to say, ‘Thank you for all that you are and for all that you do. God Bless.' I sent candy, tuna fish, instant coffee, and books. I wished I could send safety and peace." Bestselling author Caridad Pineiro, who writes paranormal romance and romantic suspense novels, said to me, "As an immigrant to this country, I value the liberties in America every day. I try to regularly help our soldiers as they protect our nation. Whether it's sending books, candy, or basic necessities, I know those small things mean the world to them."

Other writers heard about the project and joined us. Kate Collins, J.B. Stanley, Julie Hyzy, Beth Ciotta, and Robin Burcell are just a few writers who donated autographed books and food. Jill Cesa-Teneyck, Lisa's best friend, insisted on sending a dozen copies of my own mystery, Dead Air, to the Renegades.

To date, we've sent more than 200 pounds of home-baked sweets and books to Iraq.
What does the military think about the project? Kim Adams, SOS Military Liaison and an Air Force spouse in Honolulu, said, "As a veteran of the first Gulf War, I know firsthand what difference mail makes to deployed personnel.... But that war was short-term, and our troops came home. Today, our military personnel are facing longer and repeated deployments. While e-mail and Skype are available, nothing can replace the warmth of a personal letter, the excitement of a care package, and the thrill of receiving books hand-selected by readers who support our deployed personnel."

I wish everyone reading this piece could adopt a soldier and send books, candy, snacks, and, sure, homemade cookies or brownies. It's easy to do and it really means the world to our brave men and women in the military forces. As Janet Evanovich told me, "If Stephanie Plum could meet the Renegades, she'd give them a high-five and say, 'Well done!' "
Mary Kennedy is a licensed clinical psychologist in private practice and the author of the Talk Radio Mysteries. Signet published the latest installment, Reel Murder, in June. To learn more about helping the Renegades, visit www.marykennedy.net.
A version of this article appeared in the 09/27/2010 issue of Publishers Weekly under the headline: Books and the Battlefield
ALSO ON PW

Good morning and Happy Memorial Day to all of you. I just read this article and I loved it. This is just awesome, I have never before heard of authors sending cares packages to soldiers deployed. I have only read about half of each of the books by each of you, I'll be setting myself for a reread of all of them. Love you all and have a wonderful day. And to any and all deployed or have served, thank you for your service.

I want to thank the authors for helping out. Locally, we have an organization called "Goodies For Our Troops" and the group normally has three mornings a week when you can go to help get things ready to send. Then, when individual things are wrapped they may be put into small boxes and then the organizer and her special helpers pack them in boxes that are addressed and shipped. Donations for postage and snacks are accepted.
I have packed goods, donated snacks, and given checks to the cause. My late husband, when he was in Veteran's "Nursing Home" received some packages which he would share with other patients.