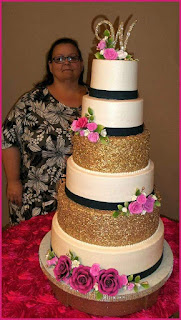 I'm working on a new Down South Cafe mystery--this one is set in December. When the Winter Garden town manager strolled into the cafe and asked Amy to participate in the Christmas parade, her staff thought it was a great idea. They suggested she could put a huge, decorated cake atop her VW Beetle and drive it along the parade route.

Like Amy's staff, I thought it was a terrific idea. But was it possible? Google turned up nothing. So I had to go to a real expert.

Meet Rosemary Galpin of Memory Makers Cakes. Rosemary is a renowned, prize-winning sugar artist. I had the pleasure of becoming acquainted with Rosemary several years ago through the Oklahoma State Sugar Art Show. As you can see from the photo, she does amazing work!

I sent Rosemary a message and asked her if it would be possible for Amy to anchor a huge decorated dummy cake to the top of her car and drive it down the road for the parade. I was afraid the cake would be too heavy. Rosemary could've fired off a quick, "Sure, you can do that." My question would have been answered, and I'd have been satisfied. But Rosemary is a perfectionist--once again, see photo--who does nothing halfway. She not only said it could be done, but she also sent me step-by-step instructions and photos showing me how to do it! And now I'm looking so forward to creating the parade float in the book!

Rosemary rocks! If you're in or near Luling, Texas, you've probably heard of Rosemary. If not, look her up. Especially if you need some beautiful goodies.
Posted by Gayle at 1:00 AM

Thank you so much for the kind words! I'm definitely printing this out for my scrap book! Rosemary Galpin, MSA

Awesome. Good descision to go with my mom

You really are amazing! Thank you for your help! *hugs*

Okay, now I gotta read the book when it comes out.