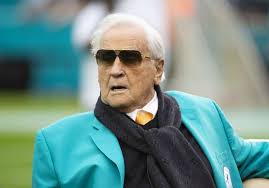 "Success is not forever and failure isn't fatal." - Don Shula

I had occasion to meet Mr. Shula once. It was a long time ago. I can't remember how long, but my children were still in car seats, so pretty long.

My husband and I had taken our children to Grandfather Mountain near Linville, North Carolina, for a day trip. We were all hot and tired, and--being on deadline--I had a notebook and paper in my lap so I could at least pretend to be working on the drive home.

Since before my husband and I were married, he'd told me all about Don Shula, Dan Marino, and the undefeated season. So I knew well how much the man loved the Miami Dolphins. Why does a man born and raised in Virginia love the Dolphins? Who knows. For the same reason he loves the Boston Red Sox, I suppose.

Stopped at a gas station, my husband bent down and poked his head through the open window. "Gayle!" His voice was a stage whisper.

I looked up from my notebook. "What?" I didn't whisper.

"Do you know who that is?" He jerked his head slightly toward the pumps across from us where an older, distinguished-looking gentleman was filling his car with gas.

I shook my head.

Instead of answering me, he went to pay for the gas and get us some drinks. While he was gone, Mr. Schula finished gassing up and got in his car. He was leaving! I looked for Tim, who was ambling back toward our car, but Mr. Shula was driving away!

I got out of the car and, with my notebook and pen in hand, I ran toward Mr. Shula's Cadillac calling, "Wait!"

Fortunately for me, traffic was coming, and Mr. Shula couldn't pull out. Also, he was gracious enough not to put his window up and ignore me. I might've ignored a crazy woman with a notebook and pen had I been in his position. Instead, he calmly turned toward me and said, "Yes?"

"My husband is a huge fan. Could I get your autograph?" I looked toward Tim who was now standing by our car. I motioned him over, but he shook his head. I motioned again. Again, I got the head shake.

"Of course." Mr. Shula took the pen and notebook, signed it, and handed it back.

I thanked him profusely before he pulled out into traffic and I hurried back to the car. Giving my husband "crazy eyes," I asked, "Why didn't you come and speak to the man? He's your hero!"

And my beloved said, "I wasn't a hundred percent sure that was him."

He rolled his eyes. "Hall of Fame."

While we were driving up the road, I decided to go back to my work but couldn't find my pen. I gave an exasperated sigh. "I think Tommy Lasorda kept my pen!"

Laughing, my husband said, "Who?"

I felt around in my seat and found the pen. "Never mind," I said. "I've got it." I'm proud to report that neither Tommy Lasorda nor Don Shula kept my pen.
Posted by Gayle at 1:00 AM

I like what you said about a man from Virginia loving the Dolphins. We're in Bills country, buy my brother is a huge Seahawks fan, and his wife loves the Packers. Go figure! (I'm for the Bills!)

What a class act.

Love that story! Thanks for sharing your fun memory.