During "this time of crisis" (aren't you sick of that phrase?), most of us have hunkered down to stop the spread of this terrible, deadly virus.  We're doing stuff you haven't done much before if not ever. 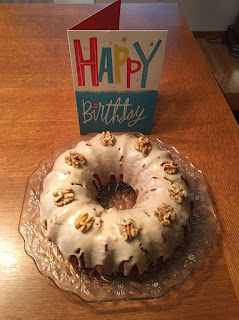 I made bread! I baked a cake. I baked banana bread. I'll probably bake bread and zucchini bread this weekend. (Yup, I froze a batch last summer--that and rhubarb.) I usually don't bake because CALORIES, but Mr. L likes something sweet for breakfast (hence, banana and zucchini bread.)

But there are other things, too. And some are pretty trivial .... like ice cubes.

We don't have an ice maker in our fridge. This was a conscious decision because they take up a lot of space in the freezer compartment. (When you stuff your freezer as full as I do, it's a LOT of space.)  So we buy a couple of 7 lb bags of ice every so often and put them in the BIG freezer.

Well, we're not going to the grocery store several times a week like we used to do. And curbside service doesn't offer ice. And guess what? Last fall, I gave ALL our ice cube trays (that had been sitting around gathering dust for years) to Goodwill. *Sigh* they were such a pretty shade of blue....

So, when that last bag of ice was nearing the bottom, drastic measures had to be taken. What the heck could I use to make ice cubes with? I searched the kitchen high and low. The laundry room, too, just in case I'd missed an ice cube tray. Nope. They were all gone. But down in the basement, behind the stand mixer (I have a small kitchen, nowhere else to keep it and it doesn't get used all that much--except for that cake I baked for Mr. L's birthday last month), I found a mini-muffin tin. I must have gotten it at a yard sale. I know I'd only used it once before, when I tested mini-quiches for my third Booktown Mystery, Bookplate Special (which was nominated for an Agatha Award for best novel--find the recipe here). 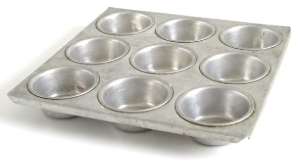 It turns out, that mini-muffin-shaped ice rounds are really quite good. They don't melt as fast as traditional ice cubes (because they're bigger), so you don't need to use as many. Mr. L is a BIG fan. In fact, he's urged me to become a slave to that muffin pan with cries of  "We need more ice!"

Well, it takes at least 3 hours to make the not-cubes. I usually start the first batch between 6 and 8 in the morning ... whenever I first walk into the kitchen to make the tea and coffee. First, I empty the tray. Now, they just don't pop out of the tray, they must be "encouraged." I usually wait about about 7-8 minutes for them to melt just enough so an inserted steak knife will  help pop them out. Ah, but I'm always looking for a faster, better way.  Since the kettle is on for tea anyway, when it gets near to boiling, it starts to steam. Ha! I hold that tray just about an inch away from the spout and then rotate the pan so that every "round" will have it's little metal backside warmed. Then they pop right out and into the waiting plastic bag and into the freezer they go.  (Don't worry, I've been using this bag for a month and it shows no sign of wear and tear. I'll use it until it falls apart. Save the planet from single-use plastics!)

So, how are you making do during "this time of crisis?"

Posted by Lorraine Bartlett at 6:07 AM

That is such a clever idea. I never thought of using a muffin tin to make ice cubes. Thank you for sharing!

I've been washing out and reusing plastic bags much more than usual, and using bread bags instead of throwing them out. We're also using more cloth towels in the kitchen,and less paper ones. Thanks for the great tip about the ice, as there are 5 of us and the old ice-maker just can't keep up, so we run out often!