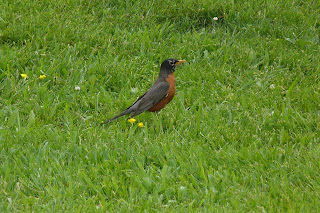 A while back, I went outside to find a robin trying to escape the cats. I shooed them away but

saw that the robin had an injured wing. I called for my daughter to come help me and to bring a box. It's at this point in my narrative I feel the need to tell you that I'm wary of birds. The bigger the bird, the greater my fear.

An aside: Biltmore offers guests the chance to discover the ancient art of falconry. You can learn how to handle a trained hawk or falcon and have it land on your gloved hand for $125 plus tax. I would be more inclined to pay them to not have a hawk or falcon get that close to me.

Now back to the story we go. We had a box, I had gloves--not gardening gloves, but cloth gloves--and we had compassion. Dear Reader, it was not enough. Fear of further hurting the bird or being flogged kept us participating in the most frustrating slow-speed chase since O. J. in the white Bronco.

Long story short (too late, I know), we finally coaxed, chased, and/or otherwise convinced the bird to hide under a prickly bush in our front yard.
Cats: "Thank goodness you have that endless supply of cat food and treats in the house because you'd starve to death if you had to catch your own food."

Fast forward at least a month. I was walking Cooper when he poked his nose behind a lawnmower attachment and then jerked back. Something was there! Was it a snake? Had it bitten him?

I cautiously moved to where I could see the "thing." It was the bird! The bird! I know because we recognized each other. We looked each other in the eye and knew.

I gasped, so happy to see that Bird had made it.

I took Cooper inside and came back out to give the cats treats so they wouldn't be too inquisitive.

Had Bird been living under our back deck this entire time? I considered taking Bird some food but reasoned it had been doing fine on its own and that I should leave it alone so it could escape the cats' notice.

Later, I heard a truck outside and then Alexa's notification light came on, alerting me to the fact that a package had arrived. Not realizing the notification was for my dad's birthday gifts that he'd received hours ago, I went to the front porch to see if there was a package.

There was not. But there was Bird about to be attacked by Willow, the cat who loves Cooper and ran away from her home to live here with him.

I shouted, "No!" and shooed her away.

Then I opened the door and called for Tim to come watch over Bird while I got a box.

Tim used to say things like "Leave it alone. Let nature take its course." Now he knows better. Everyone will be happier if I try to save whatever nature is trying to take its course on.

He stood guard while I got a box.

Hurrying outside with the box, I said, "Okay, put the bird in the box."

He would try to coax Bird into the box but was no more willing to pick up Bird than I was.

"What are you going to do with it if you get it into the box?" he asked.

"I'll go to PetSmart and get bird food."

So, with Tim in the role formerly played by our daughter, we did the hop, hop, shuffle dance across our yard. And guess what? Bird flew! But only for a few feet. That's when Babby cat (Sir Babby of Holbrook) leapt forward.

He backed away with a look of total disdain. "I was only trying to help. You are the worst hunter any of us have ever seen, and we know that old deaf and blind cat from next door."

By now, it was raining as we did the hop, hop, shuffle into the neighbors' yard. Bird got under a pretty little tree that was starting to bud. We couldn't reach it and decided that if we went ahead and fed the cats, they'd be too distracted and full to concern themselves with Bird.

Later, Tim took Cooper for his after-dinner walk. "Did you see it?" I asked Tim when they came back inside.

And what is the moral of this story? I'm going with "His eye is on the Sparrow, and He watches robins pretty closely too."
Posted by Gayle at 1:00 AM

This story made me so happy. If His eye is on the sparrow and Robins how much more is it on us. Thank you for sharing. So inspiring and and encouraging.