On the Wild Side

So far this spring, I've only seen two robins. Seems to me I should have seen a lot more by now, but maybe they knew something we didn't know were smart and stayed south until it warms up. It was 28F overnight. Definitely not warm. Of course, the other birds have been chirping enough to wake the dead for at least a couple of weeks, so maybe they're on time anyway.

And there's been a lot of wildlife activity in my neighborhood--more than I usually see when it's bustling with people and cars. Not many cars go down the street anymore (which is a cut-through for heavier traffic from both ends). When we hear a big truck, we rush to look out the window to see if it's Amazon or someone else delivering a package.

Twice this week I've witnessed "mating." That's a much kinder word for the violence the male bird and squirrel perpetrated against the females.

Earlier this week, my neighbor mentioned that there'd been a fox brazenly walking in her front yard. You almost never see foxes in this area. Coyotes, yes. Foxes, no. I asked if she was sure and she said, "rusty orange with a white-tipped tail.

So, it shouldn't have been a surprise to me the other evening when Emma started throwing a fit as she looked out one of the back windows. I glanced up to see a fox nonchalantly walking across our deck. By the time I got up and looked out the window, he was trotting across the neighbors backyard and disappeared through the arborvitae that separates our yards from the farm behind us.

Wow. Amy did see a fox.  And it came back last night, only tracing it's movements in the opposite direction and disappeared through a hole under our fence. I was surprised he went that way. Our neighbors have two dogs. I would have thought the fox wouldn't want to be anywhere near the dogs. They are, after all, rather timid creatures.

Okay, now I have to do some fox research.

Have you noticed more wildlife activity in the past couple of weeks?

P.S. It's mid-April and it keeps snowing. Not sticking, but snow this late is rather disheartening.

HAPPY BOOK DAY TO ME 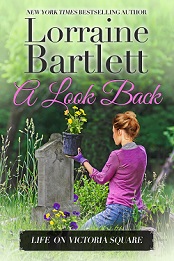 On the anniversary of her great Aunt Lizzie’s death, Katie Bonner reflects on the course of events that led her to be the custodian of Artisan’s Alley--from the moment her husband took their savings and invested it in a dying business to the death of its founder, Ezra Hilton. And it’s with tears of sadness and joy that Katie contemplates her uncertain future.

This story takes place just before the events in the Victoria Square Mystery (#7) A Murderous Misconception but may be read as a stand-alone introduction to the series.

Posted by Lorraine Bartlett at 7:14 AM