Do You Remember Tiger Beat? 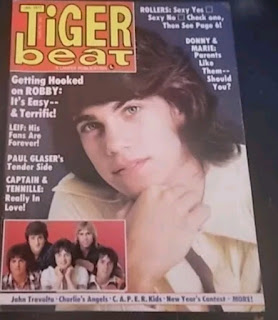 Is Tiger Beat still a thing? When I was growing up, it was a big deal. Really big. Tiger Beat kept up with all my favorite celebrities and told me important things like their favorite flavor of ice cream and the kind of people they enjoyed dating (spoiler alert: nice).

In my upcoming Ghostly Fashionista Mystery, Perils and Lace, a local high school is putting on a production of Beauty and the Beast. Since Max - the ghostly fashionista - is unfamiliar with the story, Amanda shows her the animated Disney movie. Amanda mentions to Max that the Beast is voiced by Robby Benson and that her mother had a major crush on him. " She said she even kept a Tiger Beat magazine with Robby on the cover."

After mentioning Tiger Beat, I decided to do my due diligence to determine whether or not Robby Benson had, in fact, been on a cover of Tiger Beat. I soon learned that Robby Benson 's sweet face graced a number of Tiger Beat covers, and many of them were available on e-bay or Etsy. Granted, they were much more expensive than their original cover  price; but why wouldn't they be? These are historic documents! Thinking they would make excellent giveaways to promote Perils and Lace, I ordered two. 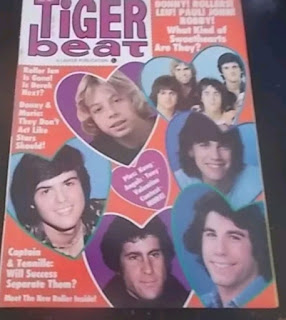 The day arrived when the two vintage Tiger Beat magazine issues - dated Jan. 1977 and Feb. 1977 - showed up in my mailbox. As I'm sure you also do, I get a lot of mail, so I opened the envelope disinterestedly. And then there they were--testaments to my childhood. I dove into those time machines and didn't emerge for hours, passing time with gasps, giggles, and groans. Oh, my goodness, these are cheesy. But they're really wonderful too! I soon realized I could part with only one of my treasures. The other one I'm keeping.

Oh, Tiger Beat, you were so sweet, with such thought-provoking articles as: Donny & Marie: Parents Like Them--Should You?, Is John a Good Pilot?; Leigh McCloskley: Why He's Wonderful! 16 Ways to Be Like Lindsay!, and The Saturday Morning Scoop!

I'll leave you with this one way to be like Lindsay (Wagner). Are you ready?

"Be kind to everyone. People will respect you for it."

I never heard of Tiger Beat when I was growing up. I was more interested in Famous Monsters of Filmland and comics

Oh my gosh! I haven't thought about that magazine in years! I used to get all of those teen mags when I was growing up to keep up with my fave celebs.

I used to get them and hang the pictures on my bedroom wall. I had really forgot about them.

Are you trying to age us,I do remember the magazine

Wow! You just made me think of how old I am, especially since I forgot all about how much I loved this magazine until now. :)

LOL! So glad to find fellow Tiger Beat fans! I, too, put those pictures on my wall.

I also loved Tiger Beat! I always bought the ones with Paul Revere and The Raiders on the cover! Wow! What memories!

I read Tiger Beat and any other magazine that had articles and pictures of, (are you ready for it?) BOBBY SHERMAN!! LOL