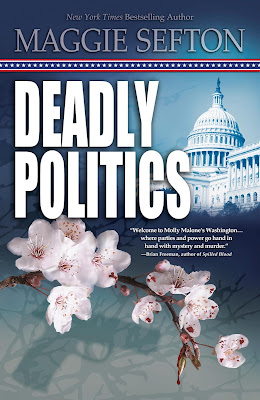 
Those of you who are newcomers to the Cozy Chicks Blog audience may not know about my first suspense novels which I wrote several years ago.  Although completely fictional the three books are set in the time period of 2012-----DEADLY POLITICS, POISONED POLITICS, and BLOODY POLITICS  (That's a slight exaggeration in the last title, folks. There's a murder in the last book but nothing graphic). Here's a brief glimpse of the first book---

Once the wife of an idealistic Colorado Congressman, Molly Malone was driven from Washington, D.C. by political backstabbing, scandals, and personal heartbreak. But now she's forced to start a new life and
do what she swore she never
would---return to the city that broke
her heart and
face the ghosts and the
enemies from her past.

I had no idea that you wrote these books. I will look for them. Are they on Kindle?