For the love of Sherlock. 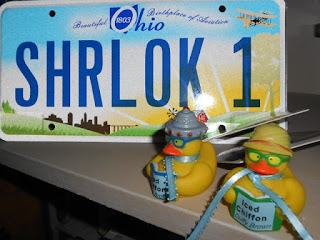 I do love Sherlock Holmes as do many others. In fact I’d say my love of Sherlock Holmes is one of the reasons I write mysteries. My author bio reads in part... While others girls dreamed of dating Brad Pitt, Duffy Brown longed to take Sherlock Holmes to the prom. My license plate is Shrlok 1and the frame around it reads Come Watson come the game as afoot. 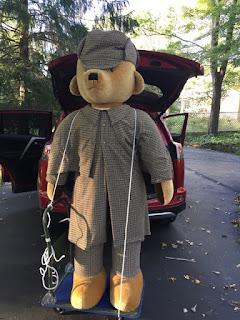 My daughter-in-law once felt the need to reminded me that Sherlock Holmes was indeed a fictional character and not a real person...how dare she. And wanting to get my VW Beetle shrink-wrapped in hunter-cap tweed complete with earflaps was a bit of obsession.
Okay, this may all seem a bit over the top even for a Sherlock lover but...as they say...you ain’t seen nothing yet. I bought a Sherlock bear. Not just any bear but a seven-foot Sherlock bear and I take him everywhere. He just fits in the back of my SUV if I lay the seats down and wedge him kiddywampus. And I had to buy him his own cart to wheel him around. 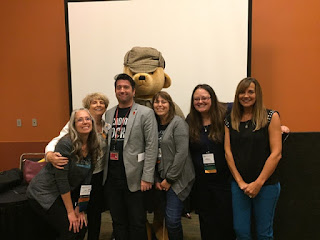 Then I needed to tie him to the cart so he wouldn’t flip over. At times Sherlock Bears looks a bit like Sherlock in bondage but some things can’t be helped. I added to Sherlock Bear’s already dapper attire by buying him his very own bright yellow crime scene tape scarf that reads Crime Scene Do Not Cross. He looks so dashing!
Sherlock Bear serves a lot of purposes. He fuels my love of Sherlock and I got by BFF with me and he draws a ton of attention. Pushing Sherlock Bear across the skywalk in downtown Cincinnati had cars stopping on 6thStreet and people pointing. 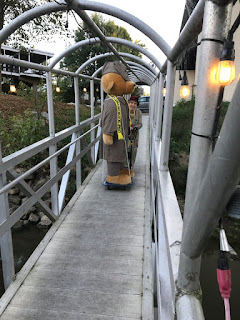 Sherlock does tend to steal the show! Crowds gather, selfies are taken, lots of chatter about the love of Sherlock, favorite Sherlock mystery and who ever best portrayed Sherlock in film. Personally, I do love Benedict Cumberbatch as Sherlock but all Sherlocks are amazing. Hands down Martin Freeman has to be the best Watson ever.
One of the most exciting places I’ve taken Sherlock Bear is on a riverboat. A paddle wheeler, no less. He accompanied me on a reader/writer Two Dames Mystery Weekend that I do annually with Tonya Kappes and seventy-five readers. Getting Sherlock onboard the boat was a real challenge he almost didn’t fit down the gangplank!!
I know this is a lot of Sherlockmania  but there is a reason for my great love of the guy. He’s smart, he’s handsome, and he solves mysteries in unique ways that I just love. And now I have him wherever I go. My only regret is that Sherlock Bear’s legs don’t bend and I can’t have him ride shotgun in my VW convertible!
So here’s to all things Sherlock Homes and those of us who think he is best detective ever. I wish you a Sherlock Bear of your own someday or a selfie with him. Happy reading and always remember... Life’s a mystery. Enjoy!
Hugs, Duffy Brown
Posted by Duffy Brown at 9:36 AM

A pleasure to meet a fellow Sherlockian! I have been a fan of the great detective since I read the Adventure of the Speckled Band in an illustrated edition as a kid. I can still see Holmes failing at the deadly swamp adder on the bell pull with his cane! Now I'm proud to say that I'm also a Sherlock Holmes author - two of my stories, The Horror in King Street and the Witch of Ellenby, have been published in the MX anthologies by MX Books, and The Adventure of the Persistent Pugilist is in the Belanger Books recently released Early Adventures volume. The editor require these stories to be absolutely authentic, so I've learned a great deal about Victorian England while writing them. I'm also proud to say that my Holmes is a true Victorian gentleman, and a real hero, quite unlike some recent depictions.

Oh my goodness, I love this! What a fantastic way to explore your love of Sherlock Holmes.