Hi, Reagan Summerside here from the Consignment Shop mysteries set in Savannah. Pearls and Poison is all about my mamma, Judge Gloria Summerside. Not often does a judge get accused of murdering her opponent, especially my very own mamma. Here’s a bit of how things got there... 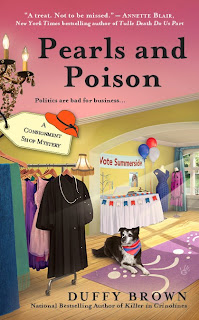 A dead-as-a-doornail opponent is one way to win an election…unless you wind up in jail for the murder.
get Pearls and Poison here

“People are going to hate me if I do this,” I said to Auntie KiKi. “They’re going to cuss a blue streak and call me names and tell me to mind my own blankety-blank business and then slam the phone in my ear.”
“Oh for crying in a bucket, Reagan.” KiKi shoved a computer printout at me. “Time to put on your iron-clad bloomers and dial the numbers on this here sheet. It’s your very own mamma everyone in this room is trying to get elected to city council. Least you can do is tell folks what a fine alderman she’d be, and Lord knows the city needs her instead of the scumbucket running against her.”
It’s election time in Savannah and my very own mamma, Judge Gloria Summerside known affectionately...or not so affectionately depending on who you were and what you did...as Guillotine Gloria is on the ballot.

Mamma and my Auntie KiKi are sisters. At birth the muses tangoed over auntie’s crib turning her into Savannah’s dance diva and they wrapped mamma in a blanket with little elephants resulting in this campaign and me getting the name Reagan.

If I had my way Mamma would run ads on TV saying what a total jerk Kip Seymour is because that’s exactly what he’s doing to her. The problem is that mudslinging politics is not mamma’s style.

The HotDoggery serves as Mamma’s campaign headquarters, the place filled with banners, signs and a Lego replica of Mamma from the Garrison Elementary kindergarten class over on Jones Street.

Bruce Willis, my four-legged bff with wagging tail, and I hated to see the Doggery fold but even we couldn’t eat enough to keep the place afloat, though heaven knows we tried. All that remained was a dull yellowish mustard stain in the back corner and a faint whiff of relish.

Today Mamma looked worried, riddling me with bad-daughter I hate making callsguilt. I’m the product of a Catholic education from no-nonsense nuns who take the honor thy mother and father idea real serious. I snapped up the phone. “Look, look, I’m dialing, I’m dialing!”

Mamma’s lips thinned to a fine line across her face reminiscent of when I married Hollis Beaumont the Third. Considering how that turned out, I figured whatever worried Mamma today was sending us all straight to hell in a hand-basket.

“I heard that Kip Seymour has a new attack ad coming out about me,” Mamma said. “I don’t know what it is but I’m concerned. They say it’s a nasty one, even worse than the that accused me of embezzling money from the Children’s Aid Society.”

“Oh, but I can do much, much better,” Kip Seymour said from the doorway of the HotDoggery. “I’m going to win this election, Gloria Summerside, if it’s the last thing I do.”
Posted by Duffy Brown at 9:22 AM