Shelters for Outside and Feral Cats 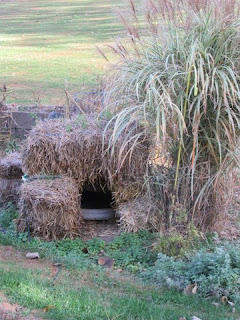 Several years ago, we cared for a yellow tabby stray who came into our yard and seemed to want to stay.  We named him Lancelot because the first time we spotted him, he was protecting a kitten. We got him care and found out he had FIV.  He lasted through the summer. When he first began staying on our property, I wanted a protected place for him to nestle and we bought an igloo.  The following year another yellow tabby came to us.  We named him Sunnybud.  He stayed for three years until his FIV took him.  In the meantime we added more than one shelter for cats who needed cover over the winter.  At times, we had three cats staying warmer.  The thing about cats is that, unless they are bonded--mother and kitties, brother and sister--they each like their own space. They can be territorial. This summer I spruced up this shelter when I cleaned it out. We have turquoise planters and I had leftover paint from a reno project. Cedar Shelter 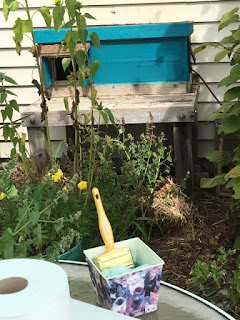 Some of the shelters have heat pads made for the outdoors.  In those that don't, we use straw.  Blankets and rugs will mildew and stay cold and wet.  In winter, we've found the cats prefer the shelters with the heat pads. No surprise there. The photo I led with is an igloo with straw bales around it to insulate it even more both winter and summer.  Sunnybud preferred being farther away from the house until he began to stay in our patio sunroom. The igloo is equipped with a heat pad.

There are many websites on the internet that have DIY instructions on how to make an inexpensive cat shelter.  ( Link for info on a DIY Shelters ) YouTube also has many DIY clips on building outside shelters.  Some of them use styrofoam coolers and others use store-bought coolers often used for picnic soft drinks. I found these on Etsy and they are called cat pods. These include a heat pad. ( Link to Extreme Weather Heat Pad )( Link for Outside Feral Cat Shelters )

Before Sunnybud left us, he introduced a brother and sister duo to our property. My husband named them Bonnie (a dark Tortie) and Clyde (a yellow tabby.) They have been more of a challenge than any others.  It's taken three years to socialize them to a certain extent. They come inside our basement now every afternoon to eat and cuddle up until morning. Then they go out again unless we keep them in for rain or freezing cold. Our basement is their apartment with cat beds and my plant grow heat pad that they use too.  But we still can't touch Bonnie.  I can pet Clyde unless I move my hand too fast or stand up!  We're working on it.  But before we even attempted to feed them inside the basement, they had to become comfortable with our property.  These two had been caught in a TNR program because both their ears were clipped.  I imagine they had a traumatic experience which is the cause of their apprehension around humans.  We added another shelter with a heat pad when they arrived.  I catnipped it and they began using it.  It was a patiently slow process.

This is a feral shelter we have under our deck. Clyde often uses the roof to survey his domain.  He and Bonnie can go inside and then crawl into a loft space that is insulated for warmth. Bonnie and Clyde both stay on our property now both day and night. Feralvilla Shelter 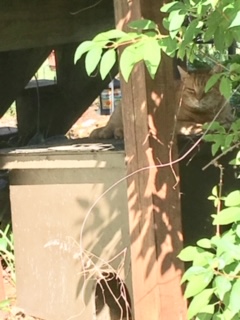 A fellow writer found stray cats on her property. I've often looked at these tubes and she told me the stray cats are using the shelter.  ( Link for Info on the Tube Shelter ) 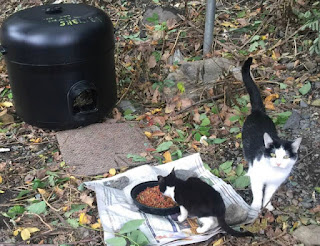 I'm an animal person, especially cats.  We have five inside rescues.  I can't handle seeing felines suffer in the winter.  Hence, the shelters.

I love your kitties almost as much as mine! I just worry about their care as I get older!

I also have ferals, but not the lovely accomodation your have. Can you tell me how you manage with the 'indoor' ferals. I had one come in the house, but she kept peeing on furniture and curtains, so couldn't have her inside. Such a shame as she is a sweetie

I"m so glad you do this,Karen!! You're the best.