No She-Shed for me

If you've been reading women's magazines for the past few years, you've undoubtedly heard about she-sheds. They are darling little sheds that don't hold tools, lawnmowers, shovels, and weed-whackers. No, they are cute, are often spaces to relax, read a book, and drink sweet tea. It's the woman's equivalent of a man cave.

She sheds can be havens for a woman's crafting life. They can be a getaway from the hustle and bustle of life. They can be girly beyond belief. Shabby chic. Victoriana. French Country, and red-white-and-blue Americana. Anything you can think about can be incorporated into your ideal of a she shed. 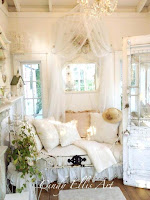 But as adorable as these little structure are, they are not for me.

Maybe in other parts of the country, there aren't so many bugs. I mean spiders, ants, mosquitoes, centipedes, flies, and every other bug that thrives in Western NY. Not to mention mice, voles, skunks, opossums, chipmunks, and the odd bird or two. 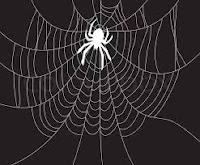 Why, just yesterday I opened my front door and found a huge spider web that not only covered the whole upper southeast opening of the aperture, but had started encrouching on the summer wreath that hangs from my door. ICK-POO!

Spiders (and other bugs) could live long and happy lives if they did not invade my domain. Just last week, I was working in my home office at my computer when I saw one of those icky-black-spiders- that-run-very-fast and before I could whip off my shoe to beat it to death, it fell off the wall and escaped behind my bookcase. So, ever since, I've been wary about spending time in my office. Is that spider still there? Has it procreated? Will I be inundated with baby spiders? (Which happened to me a few years back at our cottage, when I was killing babies by the score over a number of days.) 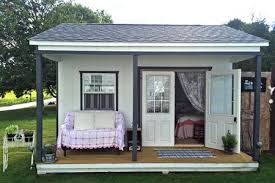 So, in theory I would LOVE to have a she-shed. A small place for me to go and write. During the summer, I write in our enclosed porch overlooking our backyard, but I simply cannot write in my office (which looks more like a warehouse with my thrifting treasures). I'm pretty sure I'll be back in our family room once the leaves start to turn and it's too cold to sit "outside." Our girls (Poppy and Emma) will be heartbroken. All I have to do is click the lock on the sliding glass doors and they come running. They love our porch as much as I do. Poppy, who is a PITA when I'm in my office, suddenly has lots to see and do in the office. She'll snooze beside me in the tête-à-tête, but in my office she wants to lie on my lap and roll over and over, which is NOT conducive for me getting any work done. Both girls are like puppies and follow me around the house. If I get up, they get up. They want to be up my nostrils 24/7. This is not something I've had to deal with the cats I've been acquainted with during my entire lifetime.

So while I love to look at pictures of she-sheds and wish I could languish in one, the reality is that in my part of the country it just couldn't happen. 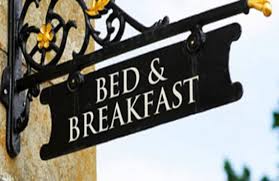 Instead, I will dream of the bed-and-breakfasts that reside in my fictional landscapes, like Sassy Sally's on Victoria Square, or Swans Nest on Lotus Bay, or Blythe Cove Manor on Martha's Vineyard.

Would you like a she-shed? What would you do with it?
Posted by Lorraine Bartlett at 6:30 AM

complete agreement - cute but I have a "no bug" rule

LOL! Just walked out to my "she-shed"/writing hut and whamo! Spider web in the face! What was I thinking to add another room that just needs to be cleaned and vacuumed on a regular basis?Loved your post!
Sofie

I love the no bug rule we live out in a rural area and wow I make hubby spray all the time and he knows when there is a bug in the house. I would love a shed as I could go there and not be disturbed as hubby has such a hard time keeping track of 2 dogs and 2 cats one of them is always in my office when I need a break for awhile! Peggy clayton