FIRST IN A SERIES Special Offer 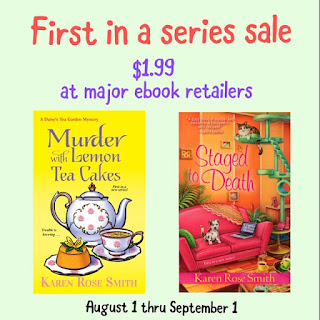 I hope you enjoy the first books...as well as all the additional books...in these series!

In an old Victorian in the heart of Pennsylvania’s Amish country, Daisy Swanson and her aunt Iris serve soups, scones, and soothing teas to tourists and locals—but a murder in their garden has them in hot water . . .

Daisy, a widowed mom of two teenagers, is used to feeling protective—so when Iris started dating the wealthy and not-quite-divorced Harvey Fitz, she worried . . . especially after his bitter ex stormed in and caused a scene at the party Daisy’s Tea Garden was catering. Then there was the gossip she overheard about Harvey’s grown children being cut out of his will. Daisy didn’t want her aunt to wind up with a broken heart—but she never expected Iris to wind up a suspect in Harvey’s murder.

Now the apple bread and orange pekoe is on the back burner while the cops treat the shop like a crime scene—and Daisy hopes that Jonas Groft, a former detective from Philadelphia, can help her clear her aunt’s name and bag the real killer before things boil over . . .

MURDER WITH LEMON TEA CAKES on Barnes and Noble

A cozy blend of murder and romance. A fun read--with recipes! --Laura Levine
Welcome to Kismet, PA, where home stager Caprice De Luca helps her clients shine in a lackluster real estate market--and where someone may only be in the market for murder. . .
Caprice De Luca has successfully parlayed her skills as an interior designer into a thriving home staging business. So when her old high school friend Roz Winslow asks her to spruce up her mess of a mansion to perk up a slow buyer's market, Caprice is more than happy to share her skills. But when Roz's husband Ted is found skewered by one of his sword room's prized possessions, it appears the Winslows may have a few skeletons in their palatial closets. With the stage set for murder, Caprice will discover she can track down an antique tapestry and a cold-blooded killer with equal aplomb--as long as she's not the next victim. . .
"A fascinating inside look at the art of home-staging--but did I mention it's also an elegantly crafted murder mystery featuring an irresistible sleuth?" --Leslie Meier

STAGED TO DEATH on Apple

STAGED TO DEATH on Amazon

STAGED TO DEATH on Barnes and Noble
Posted by KRS at 2:00 AM