A Darker Side of Cozy Mysteries 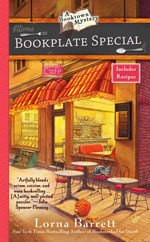 When I wrote my third Booktown Mystery (Bookplate Special), I presented my (then) editor with a synopsis that included not only food insecurity, but a way some people choose to solve it. That is: Dumpster diving. Yes. People who voluntarily climb into garbage bins to rescue food that has passed its expiration date and or (in the case of produce) was less than optimal.

He felt this was quite the dodgy subject. I asked him to to trust me and I was rewarded with an Agatha nomination for best book of the year. I didn't win, but that's another story. He never questioned me again.

I did extensive research into both those subjects. I learned that most food pantries will distribute canned (and other goods) up to two years beyond their "best by" dates. It turns out that these dates are totally arbitrary because food manufacturers are in the business of selling food. Toss out what seems "bad" and buy more. Except--most of those foods are NOT inedible, they just not optimum. As long as canned goods have not "bulged" they are safe to eat--even a decade or more after their "best by" date. The whole concept of "use by" and "best by" dates are now under heavy government scrutiny.

In my current mystery, I'm taking on a very dark subject indeed--the genesis of the me-too movement. I don't want to post spoilers here, but let's just say the incident I refer to is almost three decades old. The fact that sexual assault is just as prevalent (if not more) today speaks volumes.

Yes, I have lost readers because I've approached controversial subjects in my books and short stories, and maybe it's uncomfortable for some readers to take in, but as someone who has experienced some of the things I've written about, I hope that in the future things will change. That can't happen until we address the darker side of life.

Cozier stories may just be the way to do that.
Posted by Lorraine Bartlett at 5:00 AM