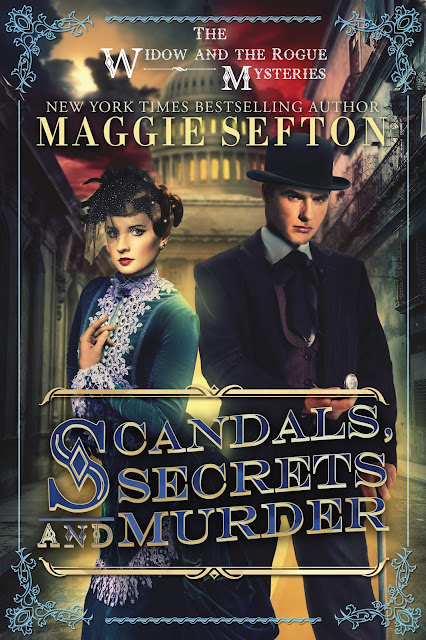 For those of you who didn't know that I also write Historical Mysteries in addition to
the Kelly Flynn Mysteries, I  thought I'd include an introduction.  SCANDALS, SECRETS AND MURDER is the first in the Widow and the Rogue Mysteries, set in 1890 Washington, D.C.  Check out the description below.

SCANDALS, SECRETS AND MURDER:
The Widow and the Rogue Mysteries
by Maggie Sefton

The 1890s---A time of Robber Barons and Reformers, Suffragettes and Swindlers.  Wall Street millionaires made fortunes overnight only to lose them the next day. They all came to Washington, D.C. Some to plead their causes, others to bribe the politicians who held power.  America was changing and re-inventing itself in time for a new century, and Washington was the center of it all.

Powerful and corrupt U.S. Senator Horace Chester is stabbed to death in a Murder Bay brothel, wrapped in the arms of his evening’s entertainment.  His assailant escapes into the crush of unwashed bodies filling the streets of 1890 Washington’s notorious red light district---a dense warren of taverns, gambling dens, and bordellos just a few short blocks from the President’s house.  There, the wicked and the wretched alike find myriad vices to tempt their darkest desires. Anything is for sale in Murder Bay---including murder.

Hero/Sleuth:  Devlin Burke, English investor, aristocratic family, amateur scientist and sometime sleuth.  He’s in Washington to oversee his family’s investments and rescue his wayward nephew Freddie who’s gone bankrupt in Sen. Chester’s risky investment scheme.  In a fit of rage, Freddie attacked Chester in a crowded Capitol Hill hallway only days before the senator’s gruesome murder. Freddie has no alibi for that night and is now the police inspector’s prime suspect.

Heroine/Sleuth:  Amanda Duncan, wealthy young Washington widow, has spent years trying to ignore the clairvoyant visions that flash unbidden before her eyes, but she can no longer.  If only her husband had believed her vision of the fiery train crash, he and her young daughter would still be alive.  Since she couldn’t save her own loved ones, Amanda turns her back on Washington society and deliberately treads where no respectable lady would dare---into the grimy and violent world of Washington’s tenement alley slums.  Perhaps her visions can help others.  This latest vision, however, was most troubling.  She saw a man stabbed to death by a shadowy assailant and a young girl screaming.

Not surprisingly, the police scoff at Amanda’s visions.  But Devlin does not.  Her account of the murder causes the hair on the back of his neck to stand on end.  He had been present in London two years earlier when the famous psychic Robert James Lees led Scotland Yard to the very door of the Ripper--only to be ignored.

Devlin and Amanda form a prickly partnership to find Senator Chester’s murderer, which takes them from the Capital’s poshest salons into the crime-infested streets of Murder Bay.  Devlin’s sleuthing instincts and Amanda’s psychic detection lead them ever closer to the truth.  But the closer they approach, the more desperate the killer becomes---and the more dangerous.
Posted by Maggie Sefton at 12:00 AM