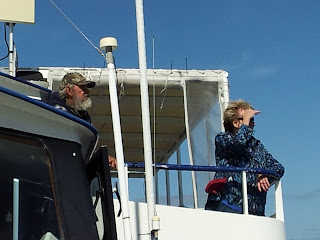 
That's me, but I'm not scouting for sharks and whales.  I'm simply enjoying the views along the Chesapeake Bay waters leading to the Atlantic Ocean.


I confess.  I'm a devotee of the ANIMAL PLANET television channel.  I've always loved animals, but the various series that appear on that channel catch my attention immediately.  And lately, I've been watching more than usual due to a sudden injury:

I pulled a large section of back muscles by doing a weird stretch in order to reach something up high.  Not smart, it turned out.  My instinct warned me to get a chair, but did I listen?  Of course not.  :(   And, now, I'm having to take it easier and go for PT therapy sessions every week for several weeks.

Since I'm now forced to "take it easy" for a few weeks, I've discovered some of those fascinating ANIMAL PLANET programs that I didn't know about.  I'll list some of them here in hopes you may want to check them out too.

One of the first programs that appeared about 3 years ago proved to be a sleeper hit:  "The Bronx Zoo."  I still remember the first episode I watched that hooked me.  One of the zoologists that works  at the Zoo was riding through the beautiful wooded park that sat in the midst of over 250 acress of New York.  The zoologist pulled the cart over, got out, and sat on the ground, then started calling for a wild Bluebird that lived free in the trees above.  She explained that she sat and called to him every day and gave him tiny bites of bird treat.  Sure enough, as soon as she called out "Bluebird, bluebird!" than a beautiful wild bluebird fluttered out of the treetops above and down to the ground about 2 feet from her.  Then he began eating a few of the dry treat, then flew back up to the treetops above.  Watching that, I was hooked.  Apparently a great many viewers were too, because "The Bronz Zoo" has remained very popular with viewers.

Other delightful ANIMAL PLANET programs include "The Secret Life of the Zoo" (Chester, England Zoo) and the Aquarium, televised in the HUGE Georgia Aquarium, which is so big there are several sharks and even a Whale!  Fascinating.  Some of my favorite episodes are with the colony of sea lions at the Acquarium and how the animal handlers interact with them.  Even racing down the sloped corridor with one of them who clearly wanted to walk (slap fins) along the tile floor a lot faster than the humans.  The sea lions really interact with their handlers.  And the sharks are cared for not only in the Aquarium but also in the ocean when the Aquarium staff go to check on the sharks in the ocean and check their health.  Can you believe that sharks when turned upside down, belly up, go docile?  That allows the medical staff ro check blood and take other tests out in the ocean.

Programs with even more action are "North Woods Law" (set in Maine) with the Maine Game Wardens and  "Lone Star Law"  (set in Texas) with the Texas Game Wardens.  Poachers  of all kinds better  beware:  those men and women are looking out for the wildlife in both areas, so you'd better follow the laws.
Posted by Maggie Sefton at 12:00 AM

North Woods Law also has been filmed in NH.