The most miserable job?

Every 4 months, I have to go to the blood letter. I hate going there.  First, I'm squeamish when it comes to blood. (I never look.)

The place I go opens at 6 am. At first, I would try to be the first person there, but I wasn't the only person with that thought, and I often ended up waiting up to half an hour to be seen. We've learned that those heading to work go early, so after a bit of experimentation, we now go around 8 am.

Sure enough, I arrived at 7:55 yesterday and there was NOBODY there!  Score.  There were two ladies doing the blood letting, and one guy at the reception desk. (I've seen up to 5 people working there.) And, sure enough, even with NOBODY there, they still made me wait 10 minutes. By the time they called me in, there were five people behind me.

So, I get called into Room 2. The world's most miserable woman walked in. It was obvious from the tone of her voice that she LOATHED HER JOB. She was curt, the tossed the vials down on the little desk, and the "it's just a little pinch" was actually a jab. Usually, there's no blood on the wad of gauze, but there was this time. I was dismissed and I hightailed it out of there ASAP.

Every time I go there, the workers are unfamiliar. You never get the same person twice. Do these employees circulate throughout the system for adequate coverage or do they hate their jobs so much that the turnover is ridiculously high?

What service people do you run into that who apparently hate their jobs? 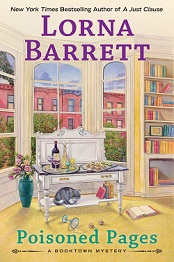 FYI -- the paperback edition of POISONED PAGES, the 12th Booktown Mystery, will be available on Tuesday, June 25th. Pre-order your copy now and help me hit the USA Today's bestseller list!

Tricia Miles, mystery bookstore owner and amateur sleuth, throws a housewarming cocktail party in her new apartment and has cooked all the food by herself--quite a feat for someone who previously couldn't boil water. Then one of her guests is poisoned and dies. Tricia's left to wonder if her cooking is to blame or if there's something much more sinister at play. Either way, Tricia's once again in hot water with her ex-lover, Chief Baker.

Meanwhile the charming town of Stoneham is being disrupted by a vandalism crime wave. It's the hot topic in the race for Chamber of Commerce president which sees Tricia pitted against two bitter rivals. With all that's going on can she find the killer before she's the next item on the menu?

Posted by Lorraine Bartlett at 7:07 AM

Oh what a shame. I am lucky that the nurses at the places I go are very nice. I run into horrible customer service these days. No one seems to care. It is such a shame. So very sorry for you. (Betty Tyler on facebook)