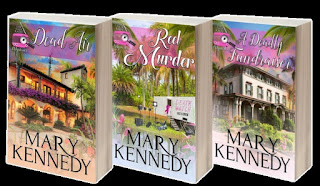 For those of you familiar with my Talk Radio Mysteries ("Frasier Meets Murder She Wrote") you've probably guessed that Lola is one of my favorite characters.  (Readers love her, too.) She's Dr. Maggie's mom and is as they say, "a force of nature." She's late fifties, refuses to act or dress or her age, and is a hoot. She buys a lot of her clothes at Wet Seal, whether she can shimmy into them or not. She's a B list actress who is still hoping for her "big break." And according to her head shot, she's been 38 for at least 8 years. At the rate she's going, she'll be younger than Dr. Maggie! (who she sometimes introduces as her sister.)

When she gets a bit part in a movie being filmed in Cypress Grove, Florida, she introduces Maggie to the director who promptly hires Maggie as a "forensic consultant." After all the movie is a psychological thriller and who better than Dr. Maggie Walsh who is a licensed psychologist? This is book 2 in the series, by the way, Reel Murder.

Old jealousies surface, emotions fly high and before you know it, the leading lady is killed. Who killed the obnoxious actress? Dr. Maggie and her mom Lola Walsh, jump in to solve the crime. 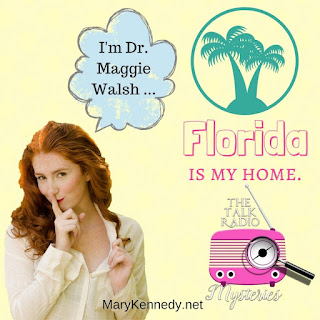 And of course, Dr. Maggie's friends and colleagues at WYME Radio help, too. In case you don't know the backstory, Dr. Maggie closed up her Manhattan psychology practice ("sick of the cold, sick of the Manhattan real estate prices, sick of hearing people's problems") and moved to sunny south Florida to become a radio talk show host.

I hope you try the Talk Radio Mysteries and I'd love to hear your thoughts on Lola Walsh! You can read about Lola and the whole series on my website, be sure to drop by. www.marykennedy.net