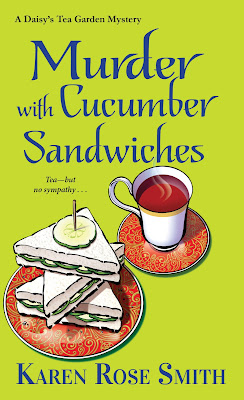 I am pleased to announce that MURDER WITH CUCUMBER SANDWICHES, the third book in my Daisy's Tea Garden mysteries, has been released this week by Kensington Books.  I have just completed the line edits on the fourth book in the series, MURDER WITH CHERRY TARTS, a December 2019 release and I am completing final edits on the fifth book, MURDER WITH CLOTTED CREAM, scheduled for release in 2020.

Restaurant critic Derek Schumaker, notorious for his bitter reviews, is about to visit Daisy’s Tea Garden, and Daisy and Aunt Iris are simmering with anxiety. A bad word from the culinary curmudgeon could really hurt their business, but Daisy tries to stay confident. After all, how can he resist her cucumber sandwiches with pimento spread—not to mention the cheesy cauliflower soup and strawberry walnut salad?

Schumaker takes a to-go order when the afternoon tea service is done, which Daisy hopes is a good sign. But when he perishes from a seizure, it looks like his food was dosed with something deadly. Considering a threat that recently appeared on his blog—and whispers of scandal in his past—Daisy has quite an assortment of suspects to sift through . . . 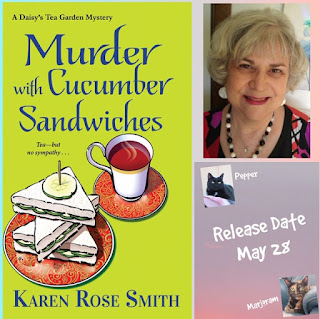