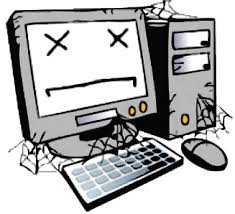 My computer had been ailing for almost a year. It was coughing up blood and I held my hands over my eyes so I didn't have to witness it's slow-and-steady decline. I would turn it on and the monitor would be black. I would pull the plug, wait a few hours, plug it back in, and it would regain conscientiousness--sometimes for a few months, but two weeks ago, it finally expired.

Luckily, I have a laptop. (In fact, the one I'm typing this on.) It, too, has had problems.  Every time Microsoft does a major update, it would lose conscientiousness. I would have to take the battery out and restart (once as many as 11 times over the course of two hours) to try to bring it back to life. It updated a little over a week ago and suddenly everything I seemed to know about it was different. All new sounds--it even took my wallpaper with it.  And I got an email from Microsoft saying as of January 2020--they wouldn't be updating it. I should have celebrated. Instead, I pulled out my "new" laptop. And did I mention the tiny screen?

Three (or was it four) years ago, I asked my friend Steven to suggest a new laptop. He's an IT guy and he suggested I get an ASUS laptop. Unbeknownst to me, it came loaded with Windows 8. OMG -- it didn't even have a Start Menu and I had no idea how to do ANYTHING on it. I put it back in the box and it sat under my easy chair gathering dust ... until Monday. Caveat: At some point during those years, I had our computer guy upgrade it to Windows 10 because Microsoft was only going to make that upgrade Free until a certain date. And there it sat, quietly gathering dust.

Monday, I took it out and decided I needed to learn Windows 10.  This ASUS fooled me. The Start Menu looked very much like Windows 7. YAY. I successfully loaded some software, but didn't really test it. But on this sort of triumph, I went out and bought a desktop computer.

With help from one of my readers (waving to John P), I bought a computer that had lots of speed and loads of gigabytes of storage, I bought the computer. Welcome back big monitor!!!  Only I didn't realize that Dropbox would suddenly dump over 40,000 files onto my (supposedly big) hard drive. Oy -- that took over FOUR HOURS to straighten out (and two online chats with Dropbox).

While that was happening, I tried loading my camera's software, took a few pictures of my cats, and tried to upload them--with NO results. I was online for another two hours trying to figure out how to solve that problem. Apparently some people have had some success, but 90% of Canon owners weren't able to upload their pictures, either. Finally, in  desperation, I called the camera shop where I got my camera. (Yes, I bought it in a bricks-and-mortar store.) The helpful "Canon Lady" told me, "just take out the photo card and copy paste those pictures." It's a workaround, but I loved my Canon software that took the pictures, loaded them directly to Dropbox, and labeled the folders by date. That isn't going to happen anymore.

Next up, trying to load my label maker software. The computer opened it with open arms. It's even Windows 10 compatible -- EXCEPT IT NO LONGER WORKS. (Another two-hour time sink looking for options.)

And that's why I'm typing this blog post on my Windows 7 laptop. I KNOW it works. In fact, I've decided to take a few days off from Windows 10 ... unless, of course, this computer starts coughing up blood, too.

Did I mention how much I LOATHE Windows 10?

What was your experience (supposedly) upgrading to Windows 10?
Posted by Lorraine Bartlett at 5:16 AM

Challenging, very challenging (the answer to my experience). EVENTUALLY I got used to it. But it was one big headache.

I’ve worked on every operating system since Windows 95 since I used to do tech support so I got used to 10 pretty quickly but it’s not my favorite version of Windows.

Sounds like what you need is to switch to an Apple laptop, such as a MacBook. I have had NO problems since I bailed on Windows about three versions back. Sure there's a learning curve, but nothing like what you're going through now.

I've gone to great length to keep Win 7 on my computer so far, even buying a computer made by my favourite computer guy, because he could put Win 7 on it again. My dad has Win 10 on his computer and I do have to help him as tech support of some kind (I do have a hand with technology, so it's okay) and I loathe Win 10. The next version will, hopefully, be better.

Windows 8 bricked 1 laptop. Then another laptop was fried out by Dell and W10 updates simultaneously.
I went back to school, I have a degree in digital forensics and am part way through another in cyber security.
You know what... I still prefer windows to mac but I really like linux.
But hey, if you have problems, you can always see if I am on fb and message me - I might be able to help troubleshoot based on not just the education and experience, but the personal "fun" I too have had. Sometimes I really hate windows.