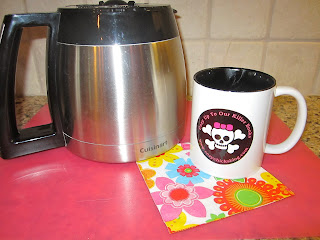 Lorraine's recent post stirred some memories awake.  We'll start with the tea/coffee memories.  My father was born in Ireland and grew up in England, so he was definitely a tea drinker.  Strong, black English tea.  I can still remember my father stirring the loose tea leaves as they swirled when he poured the boiling hot water from the tea kettle into the glass pot.  My father always made the tea strong---black and strong.  I won't repeat what he called "weak" tea, but it involves a kitty cat.   Yes, my father was a very naughty Irishman.  :)

Apparently I had my very first taste of hot tea when I was just a babe in arms---six or seven months old.  My mother told me  I was crying a lot with teething pain----and I remember how much my children cried with teething.  She said that my father went to the kitchen, brewed up a weaker pot of hot tea, put some in a baby bottle and a lot of milk and sugar, tested the temperature on his wrist, and offered me the bottle.  She said I drank it all down in gulps then blissfully fell asleep and slept for hours.

When I was a teenager, I decided to try drinking my hot tea without any cream.   My father was horrified and teased me by saying I was becoming  a Russian.  :D   In those days I was very shy, so my "tea revolt" was the extent of my teenage rebellion.

As for coffee----I simply did not like the taste.  It tasted bitter to me.  My mother drank coffee rather than tea, so I always remember the smell of brewing coffee in the house and enjoyed it.  I never understood how something that smelled so good could taste so bitter.  After many years, I had to learn how to drink strong coffee when I needed to stay awake late at night and write fiction after all my family went to bed.  Three nights a week I deliberately made a pot of strong Espresso coffee in one of the little coffee pots which make 3 demi tasse cups of espresso.  And I would drink all three demi tasse cups which guaranteed 3 to 4 hours of "awake time."  Actually, I enjoyed the taste of the strong espresso with sugar.  For some reason espresso coffee had a better flavor to my taste buds than the much weaker American coffee (nowadays---coffee shop coffee).  Thankfully, many coffee shops make much better coffee than what was available many years ago.

As for wine and beer----I confess to loving several vintages of fine wines, mostly semi-dry whites like my beloved Vouvray from the Loire Valley of France.  One day, readers will get a chance to read about Vouvray whenever my Musketeer swashbuckler novel becomes an Indie-pubbed novel.  :)  And, as for beer----I never drank it.  American beer always tasted bitter to me.  But I did like the very dark Stout beers like Guinness.   Then, the wonderful Craft Brewing of Beer came on the scene.   And in my lovely city of Fort Collins, Colorado, the very best Amber Ale appeared.  Fat Tire Ale from New Belgium Brewing.  If you enjoy beer or ale you should definitely give the craft beers a try.  There are so many on the American scene now.

My English Nana started me on milk/tea when I was a toddler. I still drink my tea with a splash of milk. Never have been able to develop a taste for coffee.