Poppy and the Terrible, Horrible, No Good, Very Bad Day

Our kittens are growing like weeds, but they are still kittens. They get into EVERYTHING.

Yesterday, I pulled out my computer tower because I needed to unplug it to try to coax it back to life. (It has issues.)  I try to start it up (cue the Stones) every few hours. Because I was going to do that, I left it pulled out from under my desk. For some reason, the kittens decided that playing behind the tower was a fun thing to do. They got yelled at several times, but--they're reckless teens. (That's why we have no guns and motorcycles around here.) Poppy got back there and, usually when I holler, she listens to me and stops her bad behavior, but this time she didn't come out. I hauled the tower out even farther and found she was totally entangled in cords for the computer, the label printer, the Internet, the router--you name it. One of the cords was wrapped around her neck. Needless to say, I panicked but quickly managed to extricate her. Holy crap! My kitten nearly strangled herself!!!

Half an hour later, they had their (second) breakfast. (They get kitty kibble as a snack, then an hour or so later, the REAL breakfast of Friskees.) Soon after Poppy ate her food, she started pawing at her mouth and sounding like she was choking. YIKES! She did this for about ten minutes. She let me look in her mouth, but I couldn't see anything stuck on her teeth.

I called the vet, but got put on hold. While waiting, she stopped the pawing. I got cut off, but decided I was overreaching.  Until ... two hours later, she started doing it again. Now I was getting panicky. What if near strangulation had hurt her throat? She seemed to be breathing a lot faster than her sister when snoozing.

The vet was able to squeeze us in and so off we went. They had a lull and we were sent right in and were relieved that it was our favorite vet who saw Poppy. As soon as I told her about the noise Poppy had made, she went, "Aha." And then she showed us that Poppy already had a couple of her adult teeth, and that her gums were a little red and she had a wiggly tooth, but not wiggly enough to come out. (She tried.) Boy, was I relieved.

And just as good, the vet didn't charge us for our little emergency.  (The woman is a saint and a brilliant kitty surgeon.) She said all Poppy needed was a visit from the tooth fairy. 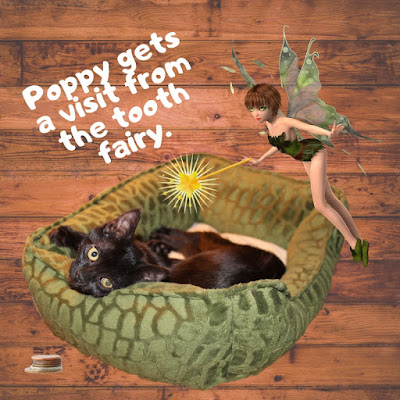 Okay, I've lived around cats all my life, but we weren't around the babies all that much because we worked 8-5. Now, more than 20 years later, we're around them 24/7 and ... honestly, I never saw a kitten teething before.

So, first Poppy nearly got strangled, then her teeth hurt, then she was stuck in a carrier and driven to the (horrors!) vet. Yes, it really was a terrible, horrible, no good, very bad day for Poppy.  But we gave her extra cookies for Happy Hour and she seems to have overcome her ordeal.

Have you had a panicky moment with your pet?


Posted by Lorraine Bartlett at 6:33 AM

we just had the "panic" a couple of weeks ago - my 2 year old cat got into our foster room and got her butt kicked by a pissed off momma cat with kittens. pulled out a toe nail, multiple scratches. (the momma cat was unharmed of course) 4 days later Chanel (my cat) must have banged her foot again as I found a crime scene in my kitchen. thank heavens for good vets. glad Poppy is ok

I have a Chihuahua mix who has allergies. One day after our walk I saw he was breaking out and his neck was swollen. I gave him a children's benadryl and called the vet. He was off but called me back. He said he was out of town and to bring him to the animal er 25 miles away if the benadryl wasn't working. Luckily it did and he was ok.

I have a couple emergency vet trip stories but, sadly, the emergencies turned out to be real and didn't end well so I won't elaborate. I'm so glad your little one was okay.

When I was a little girl a long time ago we had a kitten and a dog. The got along most of the time, but if they had an argument the cat would just find a place to hide where the dog couldn't go - in the back of our washing machine. Not knowing where the cat was we searched the house for a day or two and my Mom heard the cat crying in the back of the washer. My Dad tried to get it out, but he couldn't so he called the plumber who happened to be our neighbor. He had a full schedule but said he would be over after dinner and for heavens sake - don't use the washer. So that evening he came over and asked if the cat was really there. He was laughing so hard as he took the washer apart to get the cat. He didn't even charge my parents. But that is not the end, a few weeks later dog and cat have disagreement - cat goes back in the washer. My parents tried cat food, toys, and whatever but the can't wouldn't come out, so they called out neighbor and over he comes to get the cat out. When it happened the third time, he put some kind of sheet of medal on the back of the washer so the cat couldn't get in. That worked !! But our plumber thought he had a great story to tell his other customers.

My cat once ate a cassette tape. The only way I knew was I saw him with a little poop ball hanging out of his butt. When I went to go clean him, I saw it was dangling from tape from a cassette. The vet said not to panic, the cat would pass out all the tape. He did. But I never found out what cassette he ate! LOL!

Poor baby! I am a very panicky pet mom. Any weird little noise or action and I get the tightening in the chest feeling. You can imagine how bad it was the first time our newly adopted 6 year old beagle had her first seizure. The shelter had not seen this happen, so had now warning. I freaked and cried and she recovered within 2 minutes and looked at me like I had lost my mind and wondered where her treat was. I react the same way every time she has one and she also reacts the same way. The kitties have been behaving normal lately, so that is a good thing.

Poor baby. I have had more of those than I care to count. It is an on going ordeal that is worth every moment for having the privilege of them in our lives

Poppy looks so much like my 8-month old Harry. He is also always getting himself into dangerous situations. Glad Poppy is okay. Fingers and paws crossed he stays safe in the future.

When China lost one of her canines and wouldn't eat.The vet said she would be fine and of course she was and is. But the scariest was when my young boy Max got a UTI and my regular vet wasn't available. They recomended another vet clinic and they were wonderful. He is now on special diet and doing great!