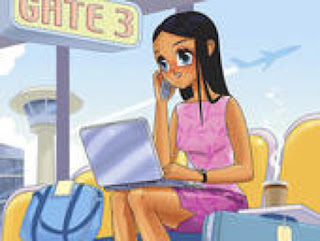 Mary's post on Monday brought back all sorts of memories about those annoying robo-calls.  I do believe the increase in those calls jangling our phones started years ago.  Most of us tried several methods to reduce all those calls.   I started out by answering the calls, listening to them give about ten seconds of their spiel, then---in a cold voice---replying "I'm not interested."  Then I would immediately click the phone off before they could start another part of their script.  I am told telemarketers use a script that's provided to them on a computer screen.

However, instead of reducing the number of phone calls I received, I started to receive even more.  Clearly, engaging with the callers encouraged them.  Soooooo, I tried ignoring the jangling phone calls.  That was REALLY annoying.  After a few months, I bought a recommended answering machines.  I would set the machines to answer the phone after the fourth ring, give a recorded message that I wasn't able to come to the phone but please leave a message. . .blah, blah, blah.  Later that day I would check the messages and return the calls of legitimate businesses.   So, that method seemed to solve the problem-----for a while.

That was MANY years ago, folks.  My former husband and I had one of the first cell phones that sat on the floor between driver's and passenger seats.  It was called a "Brick phone."  It was square and boxy and plugged into the car's cigarette lighter outlet.  Believe me, we weren't using those big, boxy phones to call friends and family.  It was purely for emergencies.  What were we using to call friends & family?  This was the early 1990s time period, so I remember using one of the early Nokia flip cell phones.  It made calls and retrieved limited amounts of information.  There were T-Mobile cell phones and Android and Samsung phones which retrieved more information.   I actually eliminated my land line phone entirely since the only calls were from telemarketers.


We were using our cell phones to call friends, family,  business associates, and other businesses we dealt with regularly. We were on the brink of a whole new world.  And it came bursting through when Steve Jobs brought out the first iPhone.  And we were off to the Races.  :)   Whatever you choose to use, folks, remember the most important point:  Don't forget to plug it in and re-charge it regularly.  :)
Posted by Maggie Sefton at 12:00 AM