The Dogs Next Door

About 14 months ago, new neighbors moved in.

They had dogs. Rather big dogs.

When I was five, I got bitten by a wire fox terrier who was just as big as me when he charged and knocked me down. Since then, I've been wary about "big" dogs.

I love dogs. Little dogs. My parents had scotches and Westies and they were pretty much sweet little dogs. Mac (the Scottie and their first) was our favorite, but their last dog, Jessie, was also a sweetheart, and in between was Buddy, who was a joy to walk. I would love to have a dog--preferably a small poodle mix. Supposedly, poodles don't smell when they get wet. But -- Mr. L isn't a dog person. He once was, but I converted him to being a cat person, and now he doesn't want to look back. *Sigh*

And so our neighbors have these largish dogs. We thought that might be a problem, but it turns out it hasn't. Their yard wasn't fenced when we moved in, and the chain-link fence we had wasn't up to code. Mind you, it was grandfathered in, but since the new neighbors also had children--one of whom was only three, we decided to upgrade our fence. Oooba-dooba -- that was a headache, and incredibly expensive. Even worse, they said they could do the fence in one day. They didn't. So there was our in-ground pool EXPOSED for more than 24 hours and there was a small child next door. (The dogs had been going out on leashes for their outdoor visits.) Finally the fence was in, but the gate was not. I'm a born worrier, so that was another headache. Finally, the gate and fence were finished. And a few weeks later, the neighbors finished off fencing their yard on both sides of the house.  Looks very nice.

That's when they started letting their dogs loose in the yard, and since then we have had hours of entertainment.

These are very quiet dogs. So when we hear them bark, we know they mean business.  Usually there's a squirrel (or some other animal) on the other side of the big fence at the back of their yard, which the previous owner put in as a wind break. When we hear them bark, we usually look out the window. Yup--one of them has barked to say, "We're cold! Let us in." Sure enough, a few seconds later, the back door opens and dogs go inside with their tales wagging incredibly fast.  Sometimes we see them wrestling in the snow. The other day, I was clearing the driveway and one of them (Lucy) came bounding up to the fence to warn me not to intrude on her territory. I told her, "Good dog!" She kind of blinked and said, "Oh, okay" and then ran back to play with her pack-mate.

Next time I get a chance to talk to the neighbors, I'm going to ask if it would be okay for me to give them dog biscuits. I'd like to make friends with them. 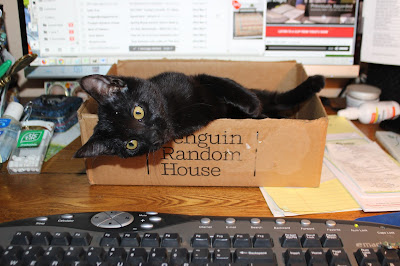 Meanwhile, here's a picture of one of our new kittens, Poppy. Isn't she adorable? (Um, for some reason she thinks she can help me write. She also likes to sit on my mouse which is uncomfortable for both of us.) It's okay if Mr. L has become a cat person. It really is.

Are you a dog or cat (or other animal) person?
Posted by Lorraine Bartlett at 6:39 AM

Cat person! I have 4 and your Poppy looks like my Max.