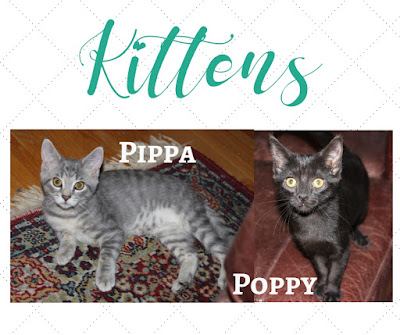 It's been almost a year since Mr. L and I had cats.  We lost our boys last March, 12 days apart, and were devastated. We weren't ready for kitties for a long time. In fact, although we had looked at a number of cats and kitten (21 in one day) we didn't find our forever furbabies, and truthfully we really weren't ready. Unfortunately, our boys had developed a bad habit of marking their territory. It was only the last year of their lives that this happened, but the damage was done.  We pulled the carpet and had to repair the floor. The carpet to the back door was also marked. (We've yet to address that situation.) 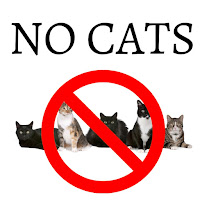 Last weekend, we were determined to find kitties. The local Humane Society had been sending me 4 or 5 emails a day saying they were overwhelmed with cats and kittens.  So, we kitten-proofed portions of the house and on Saturday went to find some. Only ... when we got to Lollipop Farm, not only was there only one cat available, but there was a mob of people looking to adopt cats. They had a "Valentine's Day Special" and had slashed the price of cat adoption and had already "moved" 25 cats during the three hours they had been open. We were crushed. (I cried.)

So I posted my frustration on Facebook and one of my readers, who happens to be a kitty foster Mom, send me a message. We went back and forth and arranged to meet Mooch-Mooch and Sepi. (*Shudder* Who came up with those names? Foster Mom strongly encouraged me to change them -- which was a no brainer.)

It was kind of funny. The pet store has no dedicated "meeting room" to get to know cats, so we had to gather in the store's (very clean) bathroom. Kind of like a clandestine drug deal. Of course, they captured our hearts in just about an instant. They were a little younger than we had planned on (but not by much, they're 13 weeks old), and they came home with us.  We named them Pippa and Poppy.

They were TERRIFIED. Why not? We were two GIANT strangers. The first night, they ran around for about an hour, and we put them in the laundry room (out came the baby gates once again) and decided to let them get acclimated to that room first. They'll be staying there at night for a few weeks until we introduce them to the whole house. 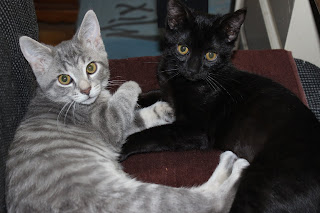 Yesterday, they spent the day with us in our connecting offices and it sounded like a herd of elephants were racing around. They have a LOT of energy. And like all teenagers, they are HUNGRY all the time! They didn't get tuckered out until last afternoon. We have a rambling ranch house and we  thought we'd let them run around last night, but they were terrified by all that open space. (They really are very little girls.) So back into the laundry room they went, and they were pretty fine about that. Tonight we're going to introduce them to another "confined environment" to see how they do.

Foster Mom warned me I might not get much word done with kittens in our offices.

Posted by Lorraine Bartlett at 9:09 AM

Congrats on your new family members!!!

Good Morning Lorraine, I'm so glad you found Pippa and Poppy. They are very cute. Sometimes I look at my Bessie who is 20 or 21 now and I think about when she passes and I wonder if I should get another cat at my age. I don't know who would take care of it when I'm gone. My son is allergic to cats. So far Bessie seems fine but a bit more bossy. Enjoy you new pets. Diane with the timeshare in Stowe in case you have forgotten who I am. LOL

So happy to see your new family members! All the best to you, Mr. L, poppa and Poppy!

I brought home an 8 week old kitten to 3 6-7 year old cats. They still don't get along unless it's feeding time. Kittens are good until they are finally cats!