CONFESSIONS OF A PACK RAT 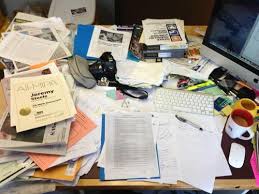 I confess, I'm a pack rat. Is there a 12 step program for me? I hope so. It's not as bad as the TV show Hoarders. At least that's what I tell myself. There aren't any coffee grinds, egg shells or rotten TV dinners in the mess, just a proliferation of papers, magazines and clippings that I can't seem to part with.

Apparently I'm not alone in my addiction to paper and clippings. Is it a "writerly" thing? I'm not sure. A friend helped me go through "my stash" the other day and laughed when she saw my treasures. "Really, Mary," she said, through gales of laughter, "do you need a Havana street map from 1984? I think there is still an embargo on tourism in Cuba."

"Oh for heaven's sake," she retorted, "buy another one." Then she tossed it in the "throw away"pile. 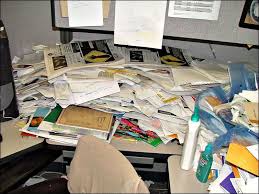 "And all these recipes," she went on. "It would take a lifetime to make then and there must be 50 chicken recipes there. I thought you were a vegan!" 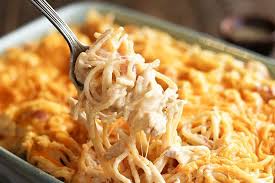 "Well, yes, but that one is for chicken spaghetti, and I can make it with vegan chicken strips. I saw some in the supermarket the other day."

"Yes, but will you actually buy them? Vegan chicken strips? They don't even sound appealing."

Hmm. She had a point. I'd passed them a dozen times and never was tempted to buy them. It just seems easier to leave out some meat/fish/chicken items than buy substitutes.

"And don't say you could make it without the chicken," she said, reading my mind. "I have that recipe and it calls for a LOT of cheese. As a vegan, you won't be able to eat that either. And don't tell me you're going to buy soy cheese. It's like trying to melt rubber bands."

I hate to admit it but my friend was right. I was keeping tons of travel brochures, recipes and decorating ideas that I would never use.

My friend picked up a Good Housekeeping clipping from 1990. "Stenciling?" she said archly. "Really, Mary, this is so out of your skill set it's ridiculous. And who stencils anymore?" 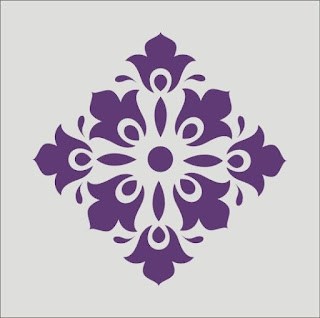 And it ended up in the garbage bin.

Hmm. Maybe we all need a friend to help us wade through our "treasures" and decide that most of them aren't really worth keeping.

What do you think? Do you hold on to things that have outlived their usefulness?

Some craft articles..i.e. stencils would be welcomed at a Day Care ...

I need your friend to come help me!

Send your friend to me please. I seem to love to print recipes and then never make them. I live alone, how much can I eat? I too, have maps because I might need them. I'm 82 and don't really think I will be driving to these places again. Help!

You are preaching to a 'keeper' who is married to a 'packrat'. I have taken the bull by the horns over the last few years, only to have the clutter come back. My health will no longer allow me to move ten things to find one, so I go without what I actually need, even though it's here, somewhere close.
I let it go to where when I DO get rid of things, some I never meant to part with go, a few of my treasures. Frankly, that has been a lesson in 'letting go'. Get rid of some at a time, so that some of the things you should truly keep don't end up in the trash or at a charity thrift store, discovered too late to be bought back.
[BTW:Try adding cooked beans instead of fake chicken; too much soy is no good for anyone-it's high in plant estrogen. You can cook, (slightly undercooked), white beans or chick peas and sear them in a pan, even use a marinade, BBQ sauce, Worcestershire sauce, etc. to add flavor, before adding to recipes.
"Quorn" is good, but it is processed with eggs, if you are vegan, that won't work for vegans.]

Tonette, good idea about the beans, I'll do that! I do like Quorn I guess I am not completely vegan yet.
Gran, good idea about donating the craft articles!
Diane, I wish I could send you my friend. I think it really helps to have someone else standing by while we try to part with our possessions.
Thanks for stopping by, everyone!