The Spotlight is on Lorraine's cozies 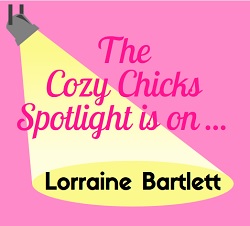 Ugh. It's winter. And when it's winter, I really don't want to read stories set in cold weather. Go figure.

Maybe you feel the same way. If so, and you haven't caught up on all my books/shorts, maybe you'd like to read a few that are set in summer.

First up:  The Lotus Bay Mysteries.
So far, I have two short stories and two novels written.  Oops--one of them is set in winter:  Christmas at Swans Nest. And, oops, it's set during a blizard. So a good place to start is at the beginning: Panty Raid, which is actually a prequel to the novels and is set before Tori heads to Lotus Bay. With Baited Breath takes place in summer, and A Reel Catch takes place in the spring.

The Victoria Square Mysteries
The first book, A Crafty Killing, takes place in October. Cool, but NOT WINTER. (Whew!) The Walled Flower takes place in spring. One Hot Murder takes place during a heat wave in July. Dead, Bath and Beyond returns to the fall, and Yule Be Dead (the latest) comes in (brrrrrrr December).  The next book in the series is already written and I'm in the process of polishing it before I submit it to my publisher. (It's called Murder Ink and it's set in summer.)

Did you know I've written a companion series to The Victoria Square Mysteries? It's called Life Oon Victoria Square. These are short stories that feature the merchants on the Square and all take place in the fall between Dead, Bath and Beyond and Yule Be Dead.

The first one features Ray Davenport and his gift shop called Wood U and is called Carving Out a Path. A Basket Full of Bargains features Gilda Ringwald-Stratton and her basket gift shop. The Broken Teacup features Katie, the protagonist from the mystery series and the mini  mystery concerns a broken teacup that receives in the mail. It's Tutu Much features the Square's dance studio. The Reluctant Bride chronicles the opening of Sassy Sally's Bed & Breakfast on Victoria Square. (I'm currently writing the 6th entry in the series.) Don't miss Life On Victoria Square!

The Tales From Blythe Cove Manor are short reads set on Martha's Vineyard. There's something just a little magical at this iconic B&B. A Dream Weekend introduces you to Blythe Calvert and her guests--a couple on the brink of divorce. It's set in summer. A Final Gift finds Blythe hosting a girls weekend and a grieving daughter. It's set in the spring. Winter arrives and so does An Unexpected Visitor. The latest installment is Grape Expectations--a summer story that features the great wines of Martha's Vineyard...except...there aren't any. I like to juggle projects and I'm currently writing the next installment which will be available in April or May. Don't miss Tales From Blythe Cove Manor.  Want to learn more about Blythe Cove Manor and Martha's Vineyard? Download Blythe Cove Seasons.  (Kindle US | Kindle Worldwide | Nook | Kobo | Apple Books)

The above are my cozier reads under my Lorraine Bartlett name. I also write the cozy Booktown Mystery series as Lorna Barrett. I write the hard-boiled suspence Jeff Resnick Mysteries novels under my L.L. Bartlett name. And if you like adventure fantasy with a feminist bent, try the Tales of Telenia, featuring ex-astronaut Amanda Shelton. Who knows--you might just like it!

Want to sample some of these books?  Download A Cozy Mystery Sampler. It's a free ebook.