Painting a Room with Feline Overseers!

I had never seen a cat climb a ladder!  But Zander isn't like most cats in many ways.  He climbed up, turned around and climbed down.

When we moved into our home over 25 years ago, we laid a parquet floor and painted the dining room, including the ceiling, the palest pink.  We've always liked it.  But we're trying to update the house in general.  I'm not a fan of neutrals.  I know all the home improvement shows love gray and taupe everywhere.  If I were moving into a house like that, I'd realize I'd have to paint EVERYTHING! 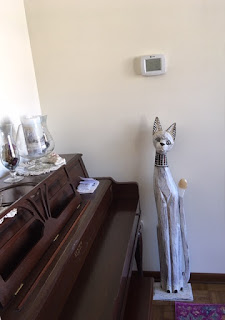 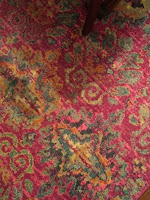 However...  I knew I wanted a Southwest theme in my office with lots of turquoise.  The best color to spotlight turquoise was cream.  When we decided to update the dining room, we switched from a pale pink Aubusson type area rug, to something much wilder.  This. It's fuchsia, purple, turquoise, indigo and vanilla.  The colors are off shade in the photo, but you get the idea. 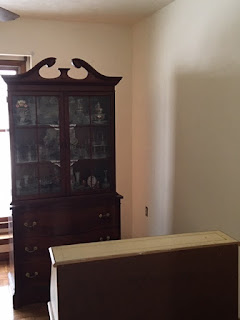 Sometimes my fashion sense and decorating sense tends toward the Bohemian.  This rug includes all my favorite colors.  And, when we remove it from the room, no one will know it was a bit crazy.  What color goes best with it and a mahogany dining room set that was my mom's?  Vanilla, a lighter shade of Cream. Actually it's Sherwin Williams Harmony--which is no odor--called Summer White.  It's warm, inviting and goes with everything in the room well.


Before my husband began painting, we discussed closing our five cats into my office and a bedroom.  They get along better with Paddy and her mom in one and the two kittens (18 months old) and Zoie in another. Just like humans, they have their cliques.  But hubby thought three of them would wander off to other rooms and the kittens would probably stay with me upstairs.  They didn't.  But they didn't get in the way either.  They watched...every move hubby made.  Freya tried to climb the ladder as Zander had but the paint tray was on top!  My husband saved it. 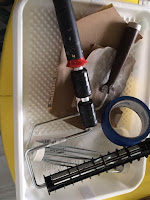 Other than Freya having specks of Summer White paint on her ruff, all went surprisingly well.  Now Zander sits on the table and is waiting for the new light to be installed.  I hope he approves! 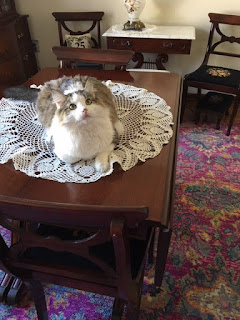