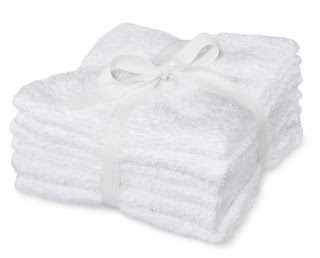 More than a decade ago, I was reading a copy of Martha Stewart magazine and took note of an article on ways to go green. In it, one of the suggestions was to use "kitchen rags" instead of paper towel. Not long afterward, I went to K-Mart and sure enough, there were kitchen rags. Basically, they were washcloths. I bought a set of eight for a few bucks and used them a few times. Then they got relegated to the rag bag and I didn't think of them much until I needed to dust furniture or clean up a spill.

As it happens, we had maybe fifty or sixty washcloths stuffed into a drawer of our cottage. They've been there for ... a long, long, time. Now why does anyone need that many washcloths? They probably came from yard sales. They were in there so long, they were musty. I took them home and washed them in a little bleach and then rolled them up and put them under the sink. 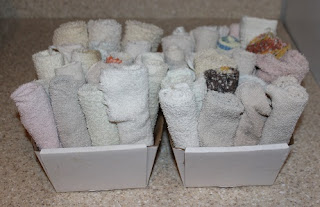 Now when reach for a paper towel I stop and think ... would a dishcloth work in this situation?  About half the time, it will. So while I'm still using paper towels, I'm going through a roll every other week instead of every week. That's less paper going to the landfill.  Although ... if the paper towels aren't soiled (like if I use them to dry off a washed apple), I'll let it dry and put it in with the recycling.

Does it take time to roll them up? Yes. Why do I do it? Because I can fit iin a lot more rolled up than I can folded. And I'm usually listening to an audiobook when I do it. I love audiobooks. I listen to them when I drive (usually it's a story I've heard before because ... I don't go very far in the winter) or any time I have a task to do that's going to take a awhile.