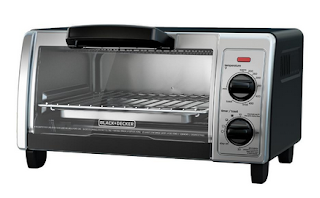 Over the years, my brother has bought most of my small kitchen appliances as Christmas gifts. The very first, was a toaster oven which lasted me over 30 years. YES, you read that right: THIRTY YEARS. It was only when I frapped the cord that I tearfully pitched it in the trash tote. (I bought a replacement at a yard sale for $2. And then I bought another for $4 -- just in case the current one, which was about the same age as the original, dies.) 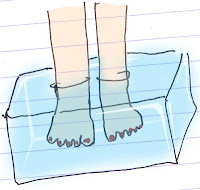 Over the years my brother bought me an electric fry pan, a crock pot, a waffle maker, a panini maker, an electric hand mixer, a food processor, and I'm sure more. This year, it was an air fryer.
It was back in October, and I freezing my feet off at our summer cottage, struggling to finish the edit on the next Booktown Mystery in order to hand it in on time (and I was a week late) when he called and said, "Would you like an air fryer for Christmas?" 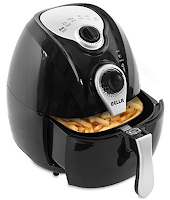 Huh? I had never heard of an air fryer before and had no idea what he was talking about. (I live a very sheltered life.) He said he had bought one and his wife LOVED chicken wings cooked in it and would I like one? (P.S. As far as I know, he has been on a diet since he bought the thing and has never tasted anything cooked in his--but he regularly cooks stuff in it for the rest of his family.) Needing to get off the phone to attend to Tricia and Angelica, I said, "Sure."

So, my Christmas present was locked in more than two months before Santa's late-night journey.

I got my present on Tuesday. Wednesday, my brother dropped in with a package of raw chicken wings, eager for me to try out the air fryer. Unbeknownst to him, I'd already made a turkey pot pie for that evening's repast. But I promised him we would have chicken wings on Thursday.

So last night we wrestled open the box and found the instructions to be sadly lacking. I texted my brother and we went back and forth and I just decided to "wing" my "wings." His instructions didn't match the manual, but I figured as he'd been making chicken wings for at least two months, I'd just take his advice. Earlier in the day, we'd stopped at the grocery store to buy a jar of Boss Sauce (OMG--is it good). And I warmed up some butternut squash (Christmas leftovers) to have with the wings.

Half-way through the cooking time, we turned the wings over and gave them a smart squirt of cooking spray. Already they smelled wonderful. Ten minutes later, we were ready to eat.

OMG -- can you say tasty? And clean up was incredibly easy, too.

So...now I'm ready to scour the Internet to find air fryer recipes because not only it is fast, but boy was what I tried last night TASTY.

Santa was extremely good to me this year, not only with the air fryer, but with books, Orange Pekoe tea (hard to find around here), DVDs, and more.  Yes, Santa was very good to me ... and I'm not sure I can pick a favorite present. Maybe you can ...

So what did you get for Christmas (Hannukah, or Kwanzaa) that you are forever grateful for?
Posted by Lorraine Bartlett at 5:00 AM