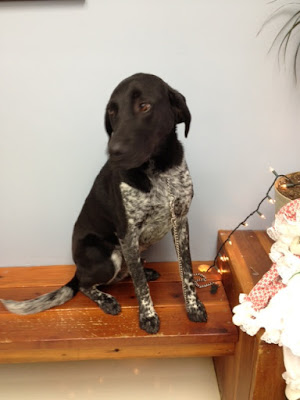 
I promised our supportive Cozy Chicks Blog readers and fans an explanation for my short
post last Tuesday.  The reason for the delay was because Monday of last week was a heartbreaking day for me.  My sweet, silly, and devoted Blue Tick Coon Hound/Black Lab mix, Max, died all too suddenly within that one day.  Only Ten years old, Max should have lived in his healthy and happy surroundings until his mid-teens.  My Black Short Hair Border Collie/Black Lab mix, Katy, is fourteen this year.  She has now survived the passing of two doggie partners---Rottweiler Carl who developed lung cancer and died in 2008 and now Max.  I will explain what caused this sudden death.

Monday of last week, Max was acting normally---playing outside with Katy.  Barking with the neighbor dogs on all three sides----Boxer mix Ginger, Multi-Mix "Barky Dog" and purebred Boxer on the 3rd side, Jesse.  Max was running around with Katy like usual after breakfast.  I was working on the laptop in the living room and could see the two of them outside through the screen door.  Later in the morning I took a break and went into the kitchen to refill my iced tea and glanced outside.  I only saw Katy sniffing around the bushes.  Lots of bushes line the back fence in my back yard, providing lots of doggie hiding places.  So I stepped outside and looked around.  I didn't see Max anywhere.   I use a combination lock on the gate to my back yard----I had to to keep long-nose Max from opening the chain link fence gate years ago.  I looked around the yard for Max and called his name.  He didn't come.

Then I looked inside the open door to the garage.  There was Max, lying on the garage floor.  I walked over to him and called his name.  He lifted up his head, looked at me, then put it down again. I thought his taking a rest was a little unusual, but I let him rest.  A half hour later I came back to the garage and checked Max again.  This time he didn't lift his head.  But I noticed his breathing looked heavier than normal.  So-----I called out to my neighbor with Ginger.  Lauren was a part-time Vet Tech and I asked her to help me put Max in the back of my Explorer because my instinct told me to take him to the Vet School Clinic not that far away.  Colorado State University has a top College of Veterinary Medicine and Medical Research.  Lauren stayed in the back with Max and listened to his heart with her stethoscope.

As we drove Lauren reported that Max's heartbeat was very slow.  And as we were turning into the long driveway to the front of the Vet School Clinic, Lauren said:  "Maggie, he's gone!"

I cannot tell you how shocked I was and how that grabbed my heart.  When I pulled in front of Vet Clinic, I ran inside and told them at the front desk and they immediately wheeled out a gurney and brought Max into one of the exam rooms.  There, one of the Vet students said that unfortunately they do see sudden deaths of healthy dogs.  I told them I wanted to find out what happened to my sweet boy, and they suggested I sign for a Necropsy to be performed.  It would examine Max's entire body and brain and find answers then issue a report.

Last Thursday, one of the Vets called me and explained what they found.  Max had developed cancerous tumors that had aggressively spread around his body, not causing any pain and didn't show up on any x-ray or could be felt by a vet.  No signs or symptoms.  The Veterinarian explained that type of cancer tumor  had attacked Max's blood vessels and when they reached a certain size, one of them ruptured.  When that happened, death was swift.  The Vet also said chemo was not effective against these tumors.  It was a stark report, but it did bring some closure.

I  had Max cremated, like Carl and Samson before him, so I can sprinkle his ashes around the back yard and scatter some of them in the mountains.  A fitting tribute to an active and lovable Hound Dog.
Sweet Boy Max.
Posted by Maggie Sefton at 12:00 AM