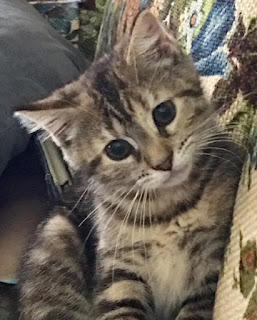 I really didn't intend to put pet sitting on my resume.  My husband and I have five inside cats and two outside feral cats that we've tried to socialize over a period of three years. They require a lot of attention, especially the two kittens we adopted last summer who are now a year old and still can get into quite a bit of trouble without much effort. 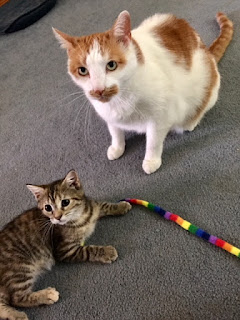 I've had friends call me for cat advice.  (That's how we ended up with two kittens last summer.) When my college roommate who lives about 45 minutes away adopted a kitten in her yard a few weeks ago, we went to visit.  Her grandkids had found the kitten and named her Dottie.  She has dots all over her tummy.  Our friend has an older cat Baler who is about nine, also a rescue.  Before a vet visit, Dottie was living on the screened in porch and Baler inside.  However, my friends were going on a planned vacation.  Baler and Dottie would be inside together.  Fortunately, from the beginning they got along.  Yes, Dottie annoyed Baler but, as a big brother should, he put up with her antics. 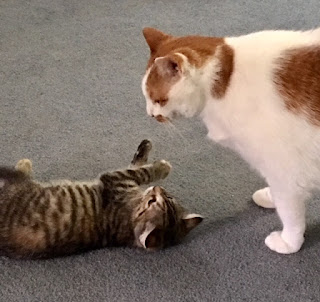 They weren't going to have anyone come in every day.  With a six-week-old kitten, I couldn't stand the thought of her going without cuddling and playing.  Kittens are a lot like kids.  Early socialization matters.  So we volunteered to help out.  We found out when their relative was coming in to feed, and we traveled there the other days. 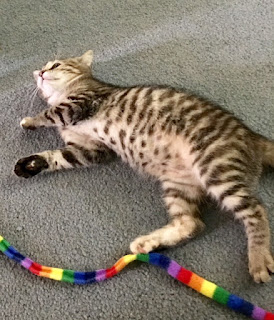 By staying a few hours each visit, both Baler and Dottie came to know us.  By the third day, Dottie was cuddling with me.  She napped on my neck and played beside me on the sofa.  Baler jumped up on my husband's chair for some petting. 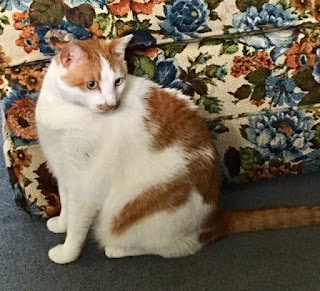 My friends are home now.  I asked if Dottie and Baler were behaving.  I heard back that Dottie is more cuddly since we were there.  Animals, like humans, just want to be fed...and loved.  One can lead to the other.  And if they learn to accept affection, they will give it back.  Right now one of our "kittens" is sitting on my desk while I write this, watching the kitten photos!  Every once in a while, he puts his paw on my arm--his version of a hug.  We'll probably nap together this afternoon.

We'll have to visit Baler and Dottie soon to see if they remember us!
Posted by KRS at 2:00 AM