As I mentioned a few months back, I'm fascinated by RVing. Fellow author Sue Ann Jaffarian has become a full-time RVer. She's still got a day job, but she's currently living in her class B RV and will hit the road when she retires at the end of the year. I love to read her posts and hope she becomes a vlogger.

I'm not great behind the wheel. What I mean by that is, I can drive for about an hour and then I want to fall asleep. That would not be good, so I will have to live vicariously by watching Youtube videos. 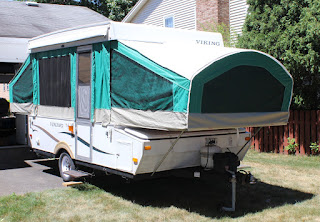 But -- someone in my family is more adventurous than me.

A few weeks back, my brother said his wife was bugging him to get a pop-up camper. She thought it would be fun for their granddaughter and give them something to do as a family. I guess I shouldn't have been surprised when two weeks later he announced, "We bought a pop-up."

They'd looked at several used campers, and then they found this. I found it almost impossible to believe this pop-up is over ten years old. It's pristine, and they got it for a very good price.

It was a lot roomier than I thought it would be. I believe one of the "beds" is a king while the other is a queen, and the table breaks down so it could be a bed as well. It's got a little 2-burner propane stove, and outdoor shower, and was spotless.

I had been in a pop-up when I was a kid, when they were still made of real canvas, and it smelled musty, which is why I could never see myself wanting one. But this pop-up not only didn't have an ordor, but it was a hot day and it was actually very pleasant inside.

So far they've only gone camping one time because kids today are scheduled up the wazoo. (Soccar -- and like why? It's not like this country is a fan of "real football" (as my Dad would say). Our team couldn't even qualify for the World Cup.) So they are going in two weeks--if not sooner.

I kind of envy them, but then I remember there's no bathroom. (Although they do have a "marine toilet." My brother had one on his boat so he knows all about it. Still....)

Now I would want to do some decorating. Nice lamonate on the floor. Maybe paint the cabinets, etc. but they are find with it as is. (As my brother pointed out, they were outside most of the time anyway socializing with their friends.)

Anyway, I wish them lots of great adventures in their little pop-up.

Are you camper type of person?


Posted by Lorraine Bartlett at 12:30 AM