A Florida State of Mind 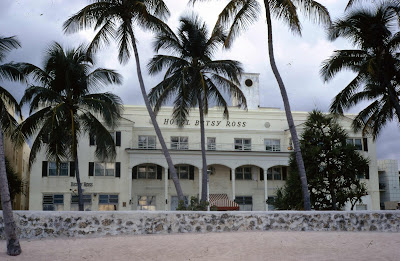 A family favorite, the Betsy Ross Hotel, is one of those lovely Art Deco jewels on South Beach.

Once again, one of Mary Kennedy's wonderful Cozy Chicks Blog posts has inspired
one of my own posts.  Today, tons of memories were stirred awake about my family's very favorite vacation site---Florida.  And, specifically, South Beach, Florida.  Ah, yes-----what can I say about South Beach, Florida that hasn't already been said.  "SoBe," as it was referred to in the late 1990's by the Chic and Fashionable set, was every bit as brash and brazen as depicted in that marvelous and hilarious Robin Williams and Nathan Lane comedy movie "The Birdcage."  That movie was actually a take-off of the wonderful French hit "La Cage Aux Folles."

At night, the main street of South Beach was brilliant with bright neon lights that flashed from all those marvelous Art Deco buildings lining the street. When my husband and our oldest two daughters, Christine and Melissa, visited South Beach years and years ago, we would stay at some of the older hotels which were cheaper.  They were not fancy, to be sure, but they were right on the beach with a drop-dead view of the Atlantic Ocean.  I have always been someone who could sit and stare at the ocean for hours.  Soothing, relaxing, name your own adjective.  And when our family expanded with the births of our two younger daughters, Serena and Maria, we continued to drive to Florida for at least two weeks of beautiful sunshine, ocean breezes, and reading and relaxing under palm trees. 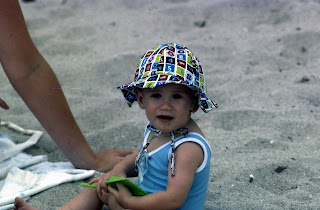 Daughter Serena---now a NASA Astronaut and presently at the International Space Station for six months---when she was just a toddler sitting in the sand at South Beach.  :)


Funny memories came back as well.  Our family loved those beautiful colorful Hibiscus plants with the bright red blossoms so much that we would try to bring some plants back to our home at that time in West Lafayette, Indiana, where my husband was a professor of Electrical Engineering at Purdue University.  We would buy two or more plants in nursery tubs and then we'd take turns sitting in the back of the family station wagon with those plant tubs between our knees to protect them during the two and a half day drive back to Indiana.  :)  Of course, the plants were happy as long as it was sunny and hot outside in an Indiana summer.  But when Winter's cold winds blew and the plants had to be moved inside, those plants did not take kindly to the dry furnace heat.  Within three years, the plants would die despite all my ministrations----cleaning leaves, pampering them.

Other memories intruded as well.  I remember floating out in that delightful ocean right across from the main street of South Beach one afternoon in July 1997.  My husband and I had had lunch earlier in the day at the News Cafe.  Our kids were vacationing with other family members.  All of a sudden, helicopters started flying over our section of the ocean and beach.  Not just one or two, but several helicopters appeared---hovering overhead.  That was totally unusual.  What everyone on that beach and floating peacefully in the ocean learned that evening on the news broadcasts was that the famous designer Gianni Versace had been murdered, shot, on the doorstep of his gorgeous mansion behind a black wrought iron fence.  I found a news media quote on Wikipedia that best describes it:   "On the morning of July 15, 1997, fashion designer Gianni Versace is shot and killed outside his Miami Beach mansion by wanted spree killer Andrew Cunanan."  We used to walk past that beautiful mansion every day on the way to the News Cafe.  It took days for police to find and catch the killer.  A very sad memory, indeed.