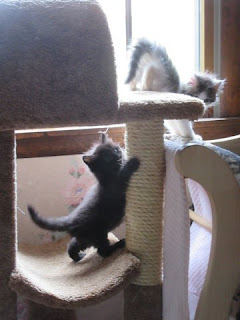 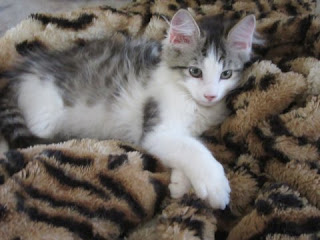 A year ago my husband's cell phone rang and he had no idea that taking the call would upset the balance of our feline family.  At that time we already had four inside cats and two outside feral visitors.  A good friend had found a litter of kittens under her parent's front porch while she was house sitting for them.  She was calling under the pretense that she needed advice on how to proceed with their care.

We offered as much advice as we could from a short distance.  She later called to tell us she had been able to retrieve two of the kittens from their mother's hidden den, but that there were still more that she couldn't reach.  She took the rescued kittens home and was caring for them in her basement.  The following day she rescued the remaining four kittens and had lured the mama cat into the cat cage that we had loaned her.  The momma was scheduled to be spayed...with the intention of then releasing her into the neighborhood again. 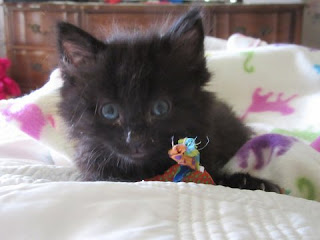 The kittens were very small.  She took them to the vet and they were proclaimed healthy.  I kept resisting my urge to visit the new crew, but I couldn't stay away.  I knew there was a semi-long-haired black female in the litter and I convinced my husband we should take her home when she was old enough.  I wanted to spend some time with Freya (my friend had already named her!) but when my husband and I met the entire crew, a long-haired male caught his attention and nestled into his arms.  We had never adopted an inside male before. They were so small, only a pound and Freya definitely needed a companion to help her in the transition to a new family.  Our friend was socializing them, but with six it was difficult.  Even with attention, some gobbled food faster than the others. So...we brought Freya and her friend who we named Zander home and our feline family grew to six inside cats.  We knew the transition, not just for the kittens but for all of our furry family, could be challenging. 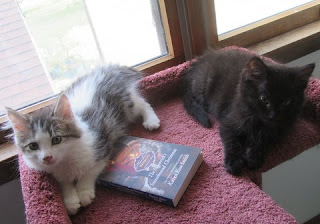 But with great patience, the kittens slowly worked their way into everyone's lives.  We kept them separated from the others for about two weeks so they would bond with us.  My husband and I took turns sleeping with them in the room so that they could cuddle with us as well as each other.  When we finally did open the door, there were hisses and growls but so many laughs too.  Our senior cat passed on a few months after we brought the kittens home.  (We had kept her separated from them because she was blind.)  When London passed, our youngest, Paddy, was in a funk and I hoped the kittens would help her.  It's taken a while but now she and Zander chase and play with toys together.  Today, a year later, we still have chases through the house and occasional skirmishes, but all have settled into routines that make for a peaceful coexistence...usually! 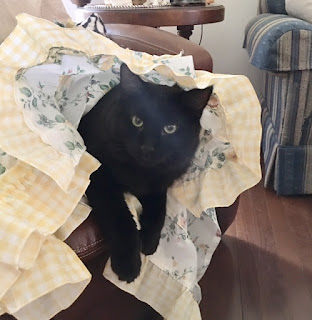 I can't imagine life without the kittens.  They are my constant companions and fill my days of writing, editing and promotion with beautiful moments and peaceful respites.  They provided the balance between work and play.  I'm so thankful for that phone call a year ago, so thankful for Freya, Zander and all of my furry friends.
Posted by KRS at 2:00 AM