It's all about the friendships 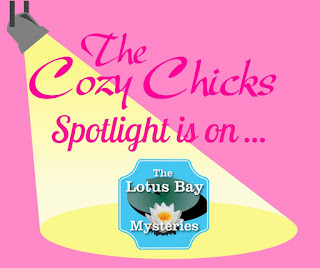 It's great to visit friends you haven't seen in a while, and that's who I feel about The Lotus Bay Mysteries. I wish I could visit all my characters more often, but when you're juggling five (or is it six?) series, it gets hard.

But I have a soft spot on The Lotus Bay Mysteries, and that's because they're a a little different than my other more traditional cozy mysteries. There's something a little more edgy about the crimes, and the spotlight is thrown on the four (and possibly five) women entrepreneurs and their relationships.

Things aren't necessarily good among them in this next outing, A REEL CATCH (out August 3rd). They're tested. And it isn't the established friendship between Tori Cannon and her BFF, Kathy Grant, that's in trouble. They may bicker a bit, but there will never be any real problems between them. 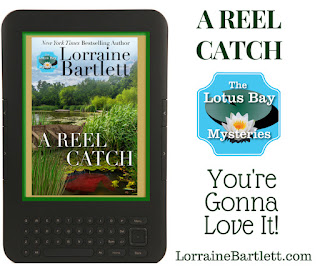 But what about the friendships they have with Kathy's contractor, Anissa Jackons? How about with Noreen Darcy, the part-owner and short-order cook for The Bay Bay. And what secrets does Lucinda Bloomfield, the richest woman in the county have to hide?

Here's the official description:
Swans Nest Inn is about to open, and Kathy Grant solicits her BFF, Tori Cannon, to help spruce up her property at the marshy end of Lotus Bay, only they didn’t count on finding a body. Who was he? What’s his connection to their friend Paul Darcy? Meanwhile, two entrepreneurs with vast business ties are interested in helping Tori reopen the Lotus Lodge, and their real motives are as murky as the bay after a storm. Will Swans Nest open on time? Will the Lotus Lodge reopen at all?

A REEL CATCH will be available on August 3rd. It's available for pre-order right now!

The book will be available in print and (crossing fingers) audio on August 3rd, too.

Posted by Lorraine Bartlett at 6:32 AM