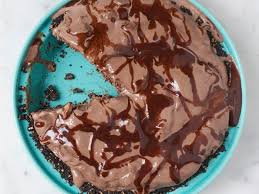 Spoon half of the chocolate ice cream into the crust and spread evenly.

Add the vanilla ice cream (mixed with the chopped peanut butter cups) on top of the chocolate ice cream.

Scoop the rest of the chocolate ice cream on top of the vanilla and spread evenly.

Freeze the pie for at least 3 hours.

Before you serve the pie, mix cream, confectioner's sugar and vanilla in a mixing bowl. Beat until cream forms firm peaks. Scoop the whipped cream over the center of the pie. Let sit for 10 minutes to soften slightly before cutting. For easier slicing, use a knife that has been dipped in hot water and then dried. Do this for each slice. Drizzle with melted chocolate if you want. Or garnish with the remaining chopped peanut butter cups.