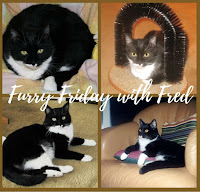 It's been seven weeks since I lost my cat, Fred. To me, he wasn't just a cat. He was my tiny son. My little Prince. Additionally, it's been five weeks since we lost Chester, Mr. L's feline son.

The truth is ... we were prepared to lose Chester. He was almost 20 years old. He had multiple health problems. Mr. L and I had learned to give him subcutaneous fluids back in July 2016 because he was suffering from kidney failure. He had other health problems that had us giving him pills five days a week, and cream in his ears almost every day for several months. But until a week before he had to make the terrible decision to euthanize him, Fred was okay. Yes, he had lost weight, but he didn't give us any real sign that he was in distress. He had apparently suffered in silence with the cancer that was rapidly growing within him. 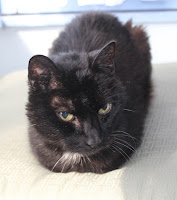 We thought we were prepared to lose Chester. But to lose Fred was absolutely devastating. And then...12 days later, we lost Chester, and he did not have an easy time. We waited a day too long to take him to his last visit to the vet. On the morning of his last day, Chester had a violent seizure. Ive seen people have seizures but nothing like what our poor sweet boy endured. That was at 7:50 am. I called our vet at 8 when they opened, and they said to bring him in at 10:30. I wasn't sure he'd make it and I worried about him suffering. Five minutes later, they called to say, "Bring him in now," which we did.

Some might cynically say the vet only wanted to make the $50 charge to euthanize him, but I don't think so. We didn't want our boy to suffer .. and he certainly did. 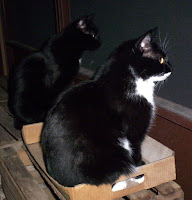 Truly, we have been lost without our boys. And our quest to find new cats has not been easy. Honestly, no cats could ever "replace" our boys. We loved Fred for just over 13 of his 15 years, and Chester was two weeks short of his 20th birthday. But ... April isn't quite "kitten season," and the truth is, Mr. L and I want older kittens, not tiny babies.  Maybe we're just a little too old for that right now.

"You should adopt older cats!!!" we've been told sternly.

Okay, but we just LOST two older cats. We are not prepared to get attached to and then lose an older cat or two too soon. I feel terrible, but between losing my parents and three cats (we lost our beloved kitten, Betsy (aged 20) two years ago), I've had too many losses these past few years. I don't think my broken heart can take much more.

So, we're without cats making tracks on our freshly vacuumed carpet. We're without food and water bowls in our kitchen. We aren't maintaining multiple litter boxes and doling out treats ... not that we haven't scoured websites and Facebook pages looking for our next much-anticipated kittens. It seems our timing is just OFF.

We will have cats in our lives again.