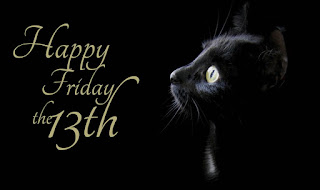 Like the subject line says ... It's Friday the 13th. Are you nervous about it?  Are you a superstitious person?

I'm not. And the reason?  Black cats are supposed to be unlucky. I've had black cats for most of my life. My first came with a very silly name. I was six and I didn't know you were "allowed" to change the name of a cat. Poor cat was saddled with that name for twelve years. Since then, I've learned that as long as you feed a cat and call it by its new name, it will learn very quickly, "Hey, I'm not stupid name anymore, now I'm called Most Excellent Name!"

Well, here we are on Friday the 13th 2018 (first of two this year.  the other is in July) and I have no black cat. In fact, I don't have two black cats.  We lost both our boys last month (within 12 days of each other) and have been in mourning ever since. We know there is another black cat somewhere in our future, we just don't know when.

Walk under a ladder?  Well, I wouldn't do that just because it's unsafe.

Breaking a mirror?  That upsets me, because it can be terribly unsafe and I don't like getting cut, but I'm not worried about seven years of bad luck. 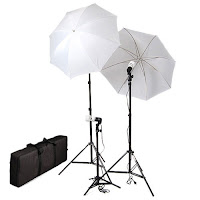 Opening an umbrella inside? Fahgettaboutit. Why worry?  In fact, it didn't faze me at all when I bought some "studio lights."  Love them!  Haven't used them much, but I have no problem opening the umbrellas that diffuse light.

Spilling salt? And then canceling out the bad luck by throwing it over your shoulder? No. First, I've already spilled the salt ... probably on the counter.  I'm not throwing it over my shoulder so that I have to clean off the counter AND sweep the floor.  Not gonna happen.

There is one thing that I am wary of ... and only because my mother would have a cow if anyone put shoes on a table. But in retrospect, for me it's more a matter of germs. Eeeek! I know where those shoes have been! Imagine the bacteria they've trudged through!!!

Is there something you're superstitious about?

Posted by Lorraine Bartlett at 6:59 AM