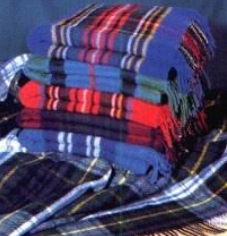 
1. cloth having a crisscross design
2. blanket

When I was small, we only had a red-and-black traveling rug. It was 100% wood and SCRATCHY.  They brought it with them when they first came to America from England. For some reason, I always associate that traveling rug with being sick. If we were sick, we slept on the couch and what did we get covered up with? Yup, the traveling rug.

I'm not sure on what trip my folks got a second traveling rug. It's a wool/acrylic blend and much softer. When my Mum passed away almost three years ago, I found it stuffed in a suitcase.  Well, that was one item that wasn't going to Goodwill! Unfortunately, when I washed it, I must not have put it on the delicate cycle, because it ripped. Oh no!  I really wanted that "rug." I took it to the tailor around the corner, and in five minutes, the owner had sewn it up. It's not as pretty as it once was, but it's back to being useful.

Oddly enough, when I went on Google to look for traveling rug pictures, I found that very one! Wow!

I asked Mum what she used a traveling rug for when she was in England, and she said they brought it along to sit on for picnics. She may have said something else about them, but that's what I remember.

It wasn't until earlier this week that I remembered that they brought me a traveling rug back from one of their trips.   How could I forget?  Well, I have a laundry hamper in my laundry room that I haven't looked at in at least 20 years.  No lie.  It took me two years to find one like that (white wicker) and then I stuffed it full of items that didn't get used often (including my favorite two rayon shirts that are now too small for me and have to be ironed) and just never opened it, forgetting about everything that was inside.  It's handy to place the recycling stuff on top of that hamper before it makes it to the garage and the recycling bins. It's now empty, and it's going to stay that way.

Anyway, my traveling rug is going to live in my office on the back of my chair where I sit and edit.

Anybody else have a traveling rug?

P.S.  I still have that first traveling rug. It's stored in a tote. Must find a way to use it, too.

Posted by Lorraine Bartlett at 1:00 AM