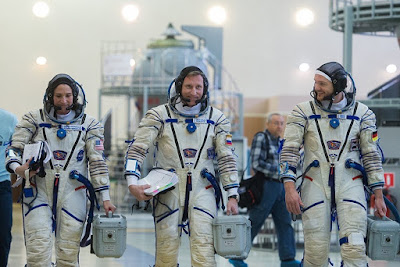 
Serena and her fellow crew mates at the International Space Station  training center in Russia.

My NASA Astronaut daughter Serena (Dr. Serena Aunon-Chancellor) has finally gotten her "ticket to ride"----a trip up to the International Space Station (ISS) this coming June as part of Expeditions 56 and 57.  She'll be part of a  3-person team which will include Alexander Gerst of  ESA (European Space Agency) and Sergey Prokopyev of the Russian Space Agency (Roscosmos). 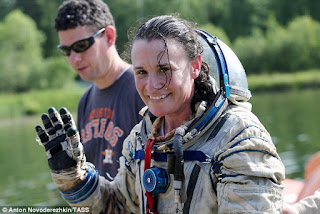 The crew will participate in 250 research investigations during their six-month expedition.  And there will be daily TV coverage on NASA TV as well as on various television stations around the U.S. and worldwide.  There will also be an introductory news conference this Wednesday February 14 Live on NASA TV and streamed on the NASA website-----www.nasa.gov. 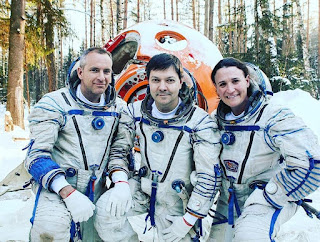 "Originally from Fort Collins, Colorado, Auñón-Chancellor earned a bachelor’s degree in electrical engineering from The George Washington University in Washington, D.C, and a doctorate in medicine from the University of Texas Health Science Center at Houston’s McGovern Medical School. She was selected as an astronaut by NASA in 2009, after coming to NASA in 2006 as a flight surgeon."

As a proud Mom, you can be sure that I will keep  all of you wonderful Cozy Chicks readers and fans updated as the date of the launch draws nearer.  Meanwhile, if you are interested, you can follow news of Serena and the upcoming Missions  Expeditions 56 and 57 by following  www.twitter.com/AstroSerena