When something doesn't work

Back in October, I put my latest Life On Victoria Square story, It's Tutu Much, for pre-order. But oddly enough, readers didn't seem interested in the story. I wondered if it was just the fact that the holidays were coming up, or if it might be the cover.  My beta readers liked the story and they liked the cover. But when it came to debut day, the pre-orders were 2/3 less than the previous three stories.

I kept focusing on the wrong aspect of the story. I kept thinking it was about the children in the dance class, but the more I thought about it, the story is really about their teacher, Dana Milton.

I asked my review crew what they thought, and they were split. Some like the cover, some thought it looked like it was a children's story.  I didn't like hearing the latter, but I had to listen.  Although it's only been 10 days since the story has been out, the sales went right down the toilet. In fact, I've already had a couple of days without a single sale. That's not good. 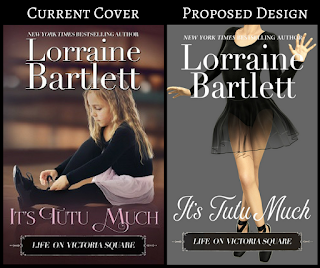 So yesterday, I asked the members of my Facebook Group (Lorraine's Perpetual Tea Party -- if you haven't joined--why not???) what they thought of the current cover and a dummy cover I put together.  I'm no Photoshop wiz, and I couldn't get the ballet dancer to stay on a colorful background. After a lot of trial and error, I managed to get her on a gray background.

Readers thought the covers were bland. They wanted color. They wanted a proper tutu. They wanted whimsy. They did NOT want a photo on the cover. The original cover didn't mesh with the other covers in the series.

However, that didn't tell me what I needed to convey to my cover designer. So, I decided to let her decide what to do. I told her what the readers said, I showed her what I had done, and let her play with it. 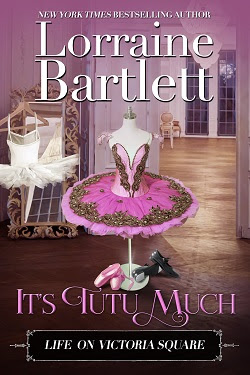 I love what she came up with. It's whimsical, it's bright, there's color -- and the ballet and tap shoes say there's more than just one kind of dance being taught in this studio.

Being quickly able to correct something like this is one of the best things about being an indie author.  Had this been a traditionally published story, it would have been stuck with a "bad" cover for eternity. I was able to turn it around in less than two weeks from publication.

Now, see if you're more interested in the story.

Dana Milton opens a dance studio on Victoria Square. Can she teach her students kindness,  respect, and shuffling off to Buffalo, or is it all tutu much?


What do you think?

P.S.  On our Cozy Chicks Facebook Group Page, our reader, Zaida Nightingale, has a cooking challenge going on. Every week for the rest of the year, she'll be making a recipe from The Cozy Chicks Kitchen.  Tune in to see what she's making this week!


Posted by Lorraine Bartlett at 12:30 AM

Email ThisBlogThis!Share to TwitterShare to FacebookShare to Pinterest
Labels: It's Tutu Much, Life on Victoria Square, Lorna Barrett/Lorraine Bartlett