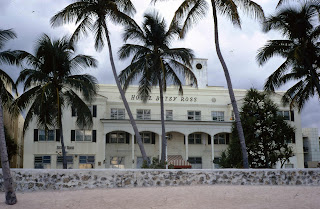 
I was going to post more family photos from Maria/John wedding reception, but Mary's post today brought back a host of memories from the past and I simply could not resist slipping into that long-ago past.  And it was a while ago for sure.  I'm talking about the late 1960s.  Yes, yes, go ahead and do the math.  :)

The mere mention of South Beach (Miami Beach), Florida brought back a ton of memories.  My husband Jorge and I loved vacationing at beaches.  And one summer we drove our  VW Beetle from Northern Virginia all the way down to South Beach, Florida and stayed at the lovely and gracious old Betsy Ross Hotel, pictured above.  The hotel was located right on Collins Avenue which was the main street that ran between all those beautiful Art Deco hotels and the sea wall which looked right out on the ocean.  Boy, was that a fantastic view.   Unfortunately years later, the entire beach area had to be "reclaimed" due to erosion and loss of sand from many Atlantic storms.  Large tall dunes were built with sea grasses growing which blocked the view of the ocean from the sea wall.

Our rambunctious two-year old daughter Christine stayed in Northern Virginia with my mother and grandmother who absolutely adored her.  We took six-month old Melissa with us, along with the large 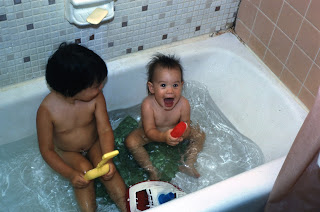 English pram-type baby carriage.  (Try stuffing that in the back seat of a VW Beetle).  We quickly learned that we probably had the only small baby in South Beach for that week.  Every time we left our hotel room with baby and pram, a never-ending stream of "grandparents" suddenly appeared.  Ooooing and cooing at cute little Melissa.  They were clearly missing their own grandchildren.

(Melissa is a little over a year old in this photo & Christine is two and a half going on three).

And Jorge and I often visited Calle Ocho (that's Spanish for "Street Eight" or Eighth Street as it was called.  Way back then, the only Cuban businesses were cafes and coffee shops.  Since I absolutely loved "Cuban Coffee" I made it a point to stop at every coffee shop we found for a cup of that delicious hot STRONG espresso coffee.  Extra strong.  Believe me, after the first three blocks (coffee shops were at the end of each block) I was walking about two feet above the ground.

Thank goodness I already had developed a high tolerance for caffeine having used it to stay awake and study  in college.  Yes, bad habits, but it worked.   And, of course, we indulged ourselves with delicious Cuban food while there.  More about that on another Blog post in the future.  Along with more memories.