I guess it shouldn't come as a (rather recent) surprise to me that I have an addiction to jewelry. I mean, I'm a person who wears 15 rings (including on both my thumbs). For a few years, one of my Dad's hobbies was making jewelry. He took courses at the (Rochester) Memorial Art Gallery. He made all kinds of jewelry, including the lost-wax process.  He gave most of his pieces to my mother and me. Besides the rings (I wear 7 he made), he made pendants and bracelets. 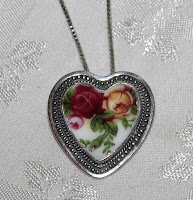 But this post is about broken china jewelry. (I also wrote one in 2016.)

So ... I already had three necklaces made out of broken china.  One Mr. L gave me for Christmas a few years back. I absolutely LOVED it. You can wear it as a pin or on a chain. (Obviously I like it better on a chain.) 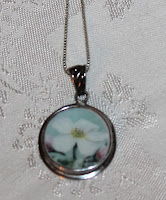 After a couple of years, I asked for a second one as yet another Christmas gift. I must admit, I'm not as fond of the second one. It's rather plain. Just a little flower. I tend to wear this one more in the summer -- because ... summer! Flowers!

For my third broken china pendant, I was feeling low and missing my parents. My Mum left me some money and I decided to treat myself to a third broken china pendant that I saw advertised on Facebook. It's Spode and is holly for the (what else?) hollydays. (Sorry about that.) And to make it more special, one of my readers (who has made jewelry) sent me the chain. In fact, she sent two!

These three pendants were in the $75+ range. and I R Cheap!  Mind you, they are definitely worth the extra price. The mounts are beautiful and very sturdy. These are definitely "professional pieces.

But since I'm a sap for old china (and buy far too much of it at yard sales), I wanted MORE broken china jewelry.  Actually, I broke one of my mother plates last summer and tried to find someone to make me a pendant out ofit.  At the time, I came up empty so I tossed out the broken plate. (BIG MISTAKE.) 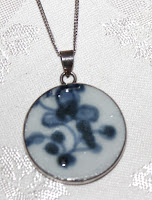 While I was going through some of my mother's things last month, I found a little white box and inside was -- SURPRISE -- a broken china pendant and silver chain. Whoa! There was a sticker on the box from a museum in Vancouver, Canada. Wow--my mother had gone on a cruise to Alaska some 15+ years ago and one of the stops was in Vancourver where she must have visited the museum gift shop. I'm betting she bought the necklace for me and simply forgot she had it.  So ... guess who has a new-to-her piece of broken china jewelry.  Again, it's not my favorite, but it has great sentimental value because I (want to) believe she meant for me to have it. 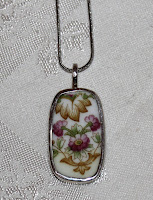 Well, once you get more than three of anything, you have a collection. I guessed I was now collecting broken china pendants. I just happened to be on Etsy looking for something else (which I did not buy) and thought about broken china jewelry.  BIG MISTAKE.  I found a page called Marooned Jewelry. The pieces there don't have as "sturdy" mounts, but they are beautiful and a LOT cheaper than the others I had. We're talking the $25+ range. I immediately found one I like and -- oops! Next thing you know had ordered it. I love the pattern, love the flowers. 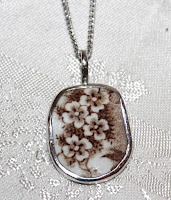 But then I realized -- oops again -- I'm going to need a chain. (Duh--forgetting the other chain my reader had sent.) So, we were on a boot-hunting expedition and Penney's had a deal on silver chains. BOGO. So, I got them. Brought them home and said to myself, "Self, this means you were meant to have yet ANOTHER broken china pendant. And so, back to Marooned Jewelry I went. This time, I ordered a brown transferware piece (because I collect brown transferware plates). Oooh! I love it!  (It arrived yesterday.)

But a funny thing happened during the time I was waiting for the brown transferware pendant to arrive.  I kept finding silver chains. I'm on an organizational kick and have been trying to get my bedroom organized. (Already have sent a big bag of clothes and a box full of stuff to Goodwill.) In all, I now have five empty chains. You know what that means ....

(P.S.  Marooned Jewelry will also make pieces from your broken china. I'm almost tempted to break a plate so that I can have one made.)

BTW, as part of my jewelry organization, I bought a bracelet display stand. I made a video about it yesterday. (A little dark, but you can get the idea of what I've got. Hopefully I'll get better the more videos I make.)  You can see it here.  And while you're there, I hope you'll subscribe to my new YouTube Channel (Lorraine's Fun Stuff). My regular (book trailer, etc.) Youtube channel is here.

Have you got a jewelry collection?
Posted by Lorraine Bartlett at 12:00 AM