Is this a story we want children to see?

Every year Mr. L and I watch a DVD of Rudolph The Red-Nosed Reindeer. I've seen it every year since I was 9. I can recite almost all the dialogue. And you know what? It's NOT a heartwarming tale. Not at all.

No sooner had Rudolph been born when his own father body shamed him. Even Santa put in his two cents, and that wouldn't be the first time. The body (or nose) shaming went on at the Reindeer Games. When they found out about Rudolph's "non-conformity," not only did the other yearlings laugh and tease Rudolph, but the adult coach (Comet) was the one to proclaim that "We won't let Rudolph play in any reindeer games." Even Santa gets in the act, telling Donner "You should be ashamed!" Ashamed because his son has a (so-called) birth defect?  Santa of all people???

Thinking he's found a friend in Clarice,  Rudolph is verbally accosted by her father, who says, "No doe of mine is going to be seen with a red-nosed reindeer." (I told you I knew all the dialogue.)

Nor is Rudolph the only character to be bullied. Hermie (or Herbie ... it seems like he's called both names) is mocked for aspiring to be a dentist, and is threatened with his job. ("Finish the job, or you're FIRED.")

Poor Rudolph and Hermie weren't even good enough for the Island of Misfit Toys. 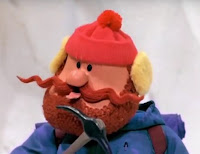 The one redeeming character is Yukon Cornelius ("Ta-da! In person!") Although a bit of a blow-hard, he only has Rudolph's and Hermie's welfare at heart.

It isn't until Santa needs Rudolph to light the way on a stormy Christmas Eve that the residents of Christmastown decide to accept Rudolph for who he is. And the head elf decides he will allow Hermie to practice dentistry. (I hope Hermie pulled all that elf's teeth, too.) Of course, maybe Santa is so grumpy because Mrs. Claus feeds him such unappealing food.  (Even gray apples???)

Is this the kind of story children should be watching?

And don't get me started on the song "Baby It's Cold Outside," where the loutish host isn't listening when his woman guest tells him (more than once) "The answer is No!"

Despite the terrible story line, Mr. L and I did indeed watch Rudolph this week. But this time we watched it a la MST3K (Mystery Science Fiction Theater 3000). We made sarcastic remarks about the characters and how mean they were and found new joy in Rudolph The Red Nosed Reindeer.  I highly recommend it.

What other holiday specials cause you to cringe?

Posted by Lorraine Bartlett at 5:54 AM