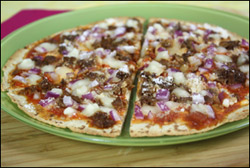 I wrote a blog on "food hacks" a couple of weeks ago. Just click on the link under "blog" if you missed it.
A couple of readers sent me their own "food hacks" for pizza and I think they're worth a try. The pizza above is a snap, just use a whole pita, or low carb tortilla for the crust and you save a BUNCH of calories. And it tastes good. I found the best way to do it is to heat the pita or tortilla in the oven first, add the toppings and then put it back. You'll have a tasty meal for about 300 calories and you can eat the whole thing! (You don't have to share!) Use low-fat mozzarella cheese, and you can even buy fat-free parmesan, (but I don't really think it's worth the trouble. A few sprinkles of the real thing won't kill you and won't blow the calories budget.)
On to the second reader suggestion. Have you tried a Portobello mushroom as a pizza crust? It's tasty and delicious. Not at all difficult or time-consuming to make.  It's filling and you can have both halves for about 150 calories. 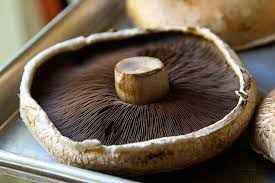 Yes, I know the lowly Portobello looks a bit "nekkid" in the photo above, but you can turn it into something like the photo below, and I'll tell you how.  With a little ingenuity you can turn it into a cheesy, delicious treat, topped with a bit of fresh basil, and about 75 calories for each half. Snack time, anyone? Count me in! 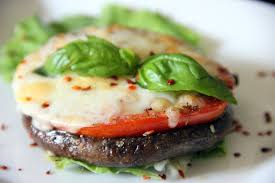 Add a little pepperoni (either real or the veggie version) and you have this.. 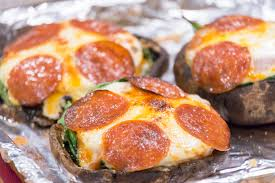 Surprised? Just a few simple changes can make a Portobello your new favorite "go to" snack food or "quick dinner" food. You can even make a fun party platter like this one. 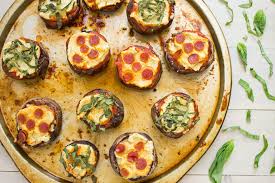 Here is a basic recipe to get you started. I make the all-veggie version, but you can add whatever toppings you like. If you want to keep the calorie count down, use low-fat mozzarella cheese and about 1/4 cup of either home-made spaghetti sauce, or crushed tomatoes jazzed up with spices.) I've started making my own spaghetti sauce and freezing it.  You can even just a use of large slice of plump, juicy tomato in place of sauce, if you like.
Here you go...
Preheat oven to 400 degrees. Lay a tin foil on a baking sheet and spray with nonstick spray.

Cut two portobello mushrooms in half. Place TWO mushroom caps on center of the foil, rounded sides down.
Place another large piece of foil over the mushrooms. Fold together and seal all four edges of the two foil pieces, forming a well-sealed packet. Bake about 12 minutes.

Next step is to remove the foil, and carefully (it will be hot!) drain excess liquid from the baking sheet. Thoroughly blot excess moisture from mushroom caps with a paper towel. You want them dry, this is important.

Now add your fave toppings. Spaghetti sauce, (1/4 cup), mozzarella  cheese, (1/3 cup)  and now add as many veggies as you want. The trick is to bulk up the pizzas with veggies, not pile on extra cheese. You can have both halves for about than 150 calories with my version. If you add diced chicken, pepperoni, or diced ham, or add more than 1/3 cup of low fat mozzarella cheese, the calorie count will obviously be higher.

Bake until mushrooms are tender and cheese has melted, about 8 additional minutes in the 400 degree oven.
Bon appetit, everyone! Mary Kennedy
﻿
Posted by Dr. Mary Kennedy at 12:00 AM