My Dad did a lot of crafty stuff. He framed houses, fixed plumbing, put on roofs, did just about any home repair you could think of--and always on a budget. But he also made jewelry, fixed watches and clocks, and he carved. When he passed away almost eight years ago, I had the task of clearing out his workshop, and I was rather surprised at how many carvings were left unfinished. The ones below are some of them. Before my mother passed, I had found a box of "hounds" that were finished except for painting. He had one or two done, so I was able to figure out how to "finish" them off. 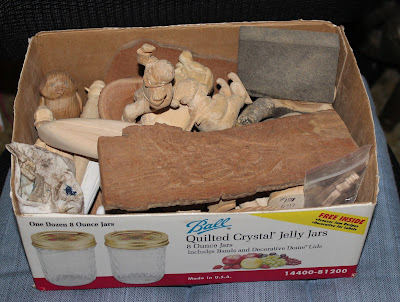 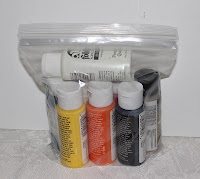 The box above held the rest. Or rather, I found them squirreled away all over his workshop and put them in this box. And I decided that painting them would be a nice summer job. Except ... they sat there for a year and nothing happened. I'm a busy person! But earlier this summer I thought I might like to take a crack at them.  The first thing I did was buy some acrylic paint and a yard sale that featured a LOT of craft items (including a bunch of rubber stamps, which I've been happily using all summer). But -- here we are on the first day of summer and I haven't done much more than photograph them for this post. (I did buy some paint brushes, so it's not like I'm not thinking about them.)

Aren't these snowmen cute? Or at least the finished one. But I suspect that  Dad didn't paint the finished one. He had two carving buddies that he met at a class he took at continuing education here in our town. After the lass was over, they met at each other's house. There was Estreter (I spelled that phonically--because I don't know how she actually spelled her name. She may have been Belgium (or maybe from one of the slavic states) and John.

My Dad was in charge of making the blanks, and Estreter was a wiz at painting. Dad's first carvings were rather drab, but once Estreter started pointing out painting techniques, my Dad picked up on it fast. But at least this gives me a guide as to how I should approach painting the one on the left. 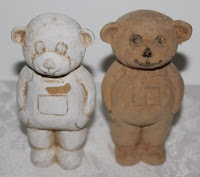 By the look of these bears, I can deduce that once Dad was happy with the carving and the sanding, he put a base coat of white acrylic paint on each carving. I think I have two bottles of white, and it looks like I'm going to need them.  The brown stuff on the bear is saw dust. Wow--that basement was full of saw dust, and so is the both. It makes me want to sneeze when I get near it. I will have to haul my compressor outside so that I can blow all the dust off each piece before I paint it.  Although quite a few of the carvings look like they could use a bit more sanding.  Where's my sandpaper? 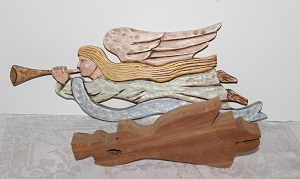 As I said, Dad made the blanks. On the right is a finished angel blowing a horn, and the rough cut for the blank. I probably won't do anything with it because A) I am afraid of knives, and B) I don't think I would have any carving talent. Just thought you might like to see how they start out and how they were finished. (He would put brown shoe polish on the finished product to give it some "texturing.") 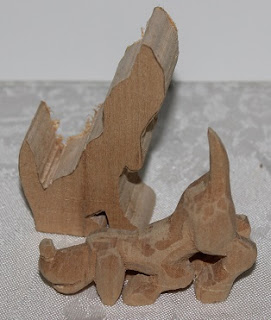 The top hound above is a blank, and the hound below just needs a little more sanding before it can be painted.  Sanding I can do. 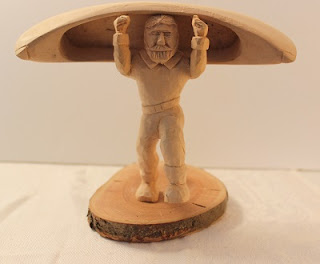 This guy is holding up a canoe. What's with that? The little slab of wood he's standing on? My folks had cedar bushes/trees (whatever) at the side of their yard and one got cut down. Dad chopped it into slices and quite a few of his carving stand on them.  (Smells nice before the polyurethane goes on.) 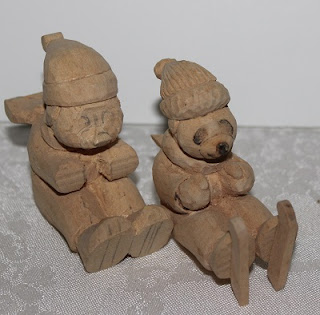 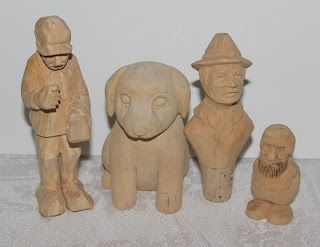 These guys (and puppy) are all ready to be painted. Wish me luck! 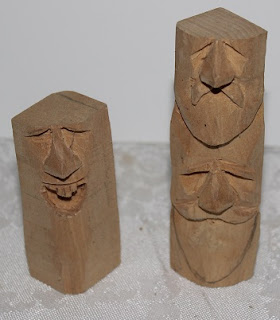 These guys are interesting. This is the front side. 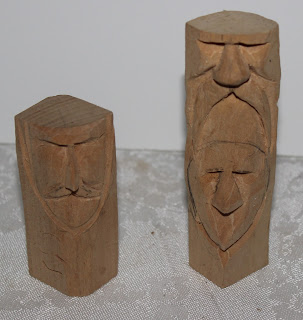 ... turn them upside down and this is the back side. I'm not going to paint them. I don't think I could pull it off and perhaps they weren't meant to be painted anyway.

This bearded guy (Santa?) is from the earliest days my Dad carved. I know because he always dated his carvings, although this one isn't dated--I already have several finished ones that are. I think he'd be happy to join his brothers in one of my curio cabinets.

I think my Dad would be happy to know that I'm going to (at least) try to finish off some of his carvings. I'll never be able to paint them as well as he could, but ... I'm sure going to try.

And my Dad's carving are what inspired me to write the first Life On Victoria Square story, CARVING OUT A PATH. I wrote about it earlier this year. (Click this link.)  I wish my Dad would have read it. I think he might have enjoyed it.  (For more information on that, click this link.)

Do you have some craft projects you want to finish up?