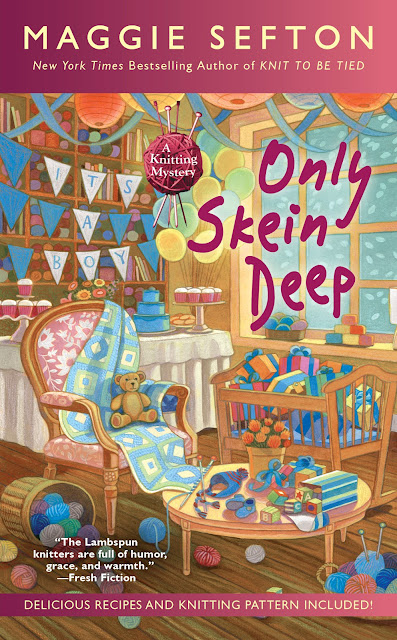 Here's a blurb for those of you who aren't familiar with Kelly Flynn and the Gang:

Kelly Flynn and her boyfriend, Steve, couldn’t be happier as they await the birth


of their baby boy. As the Lambspun Knitters sit around the table crafting their keepsakes, the story of Giselle Callahan is a popular topic of conversation. Giselle is the young wife of Henry Callahan, a Fort Connor banking scion, who traded in his previous wife of forty years for a newer model. Giselle’s prowess as both a skilled country club golfer and social climber puts her on someone’s hit list. When she is found dead on the greens at the golf club, Kelly and her Lampspun crew worry that a vicious killer is in their midst. They must work fast to bring a  clever murderer to justice on the back nine before Kelly’s very special delivery...
Posted by Maggie Sefton at 12:00 AM

Email ThisBlogThis!Share to TwitterShare to FacebookShare to Pinterest
Labels: In the Spotlight, Maggie Sefton, ONLY SKEIN DEEP